Llanrhaeadr-yng-Nghinmeirch is a village and parish in Denbighshire. It lies in the Vale of Clwyd near the A525 road between Denbigh and Ruthin. It was also known under the anglicised spellings of Llanrhaiadr in Kinmerch in the nineteenth century,[1] and Llanrhaiadr yn Cinmerch, officially until 6 September 1968.[2]

The mediæval parish church of St Dyfnog contains a Tree of Jesse window, dating from 1533, described as "the finest glass window in all Wales, exceeded by few in England",[3] which was originally part of Basingwerk Abbey near Holywell. Nearby is St Dyfnog's Well, once a destination for pilgrims.[4]

There is a primary school in a comparatively modern building, and the 16th-century King's Head public house in the village centre.

Llanrhaiadr railway station served the village between 1862 and 1953. 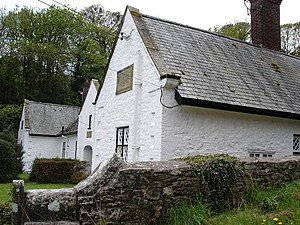 Almshouses in Llanrhaeadr. The inscription reads that Lord Bagot, great great nephew of the foundress, repaired and improved the houses in 1820.