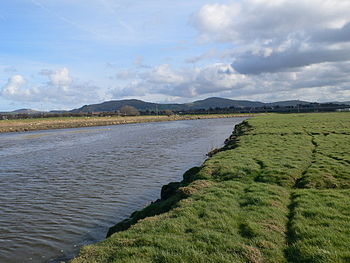 The Clwyd at Rhuddlan 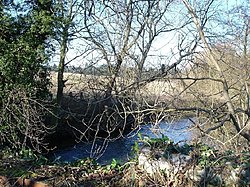 The River Clwyd is the principal river of Denbighshire, rising in that county and marking its southern boundary for some miles before carving the gentle Vale of Clwyd in the heart of Denbighshire and reaching the sea in Liverpool Bay.

The river has given its name to the Clwydian Hills to the east of the Vale, on the border of Flintshire and Denbighshire.

The Clwyd rises in the Clocaenog Forest (SJ045535) five miles north-west of Corwen. From there it flows due south, and before long it becomes the county boundary between Denbighshire and Merionethshire. At Melin-y-Wig, the river west and north then heads east-northeastwards, finally leaving the county border near Pandy'r Capel and curving north through Denbighshire. The A494 to Ruthin follows in its valley.

At Ruthlin the Clwyd leaves the relatively narrow valley and enters a broad agricultural plain; the Vale of Clwyd. Just south of Denbigh it is joined by the River Clywedog. This substantial tributary also has its source in the Clocaenog Forest but drains out to the east and north of the forest and passes through Cyffylliog, Bontuchel and Rhewl before meeting the main river.

Then the Clwyd meanders northwards through the fertile Clwyd valley to the pocket-sized city of St Asaph. Two miles north of St Asaph, the river is joined by a tributary as large as the main river, the River Elwy. In normal flows at low tide, the waters of these two rivers can be seen flowing side by side down the river with little mixing.

The River Elwy has its source a long way to the west on the flanks of Moel Seisiog south-east of Llanrwst. It also has a tributary the River Aled with its source in the upland lake Llyn Aled. The Elwy flows principally eastwards to join the Clwyd passing through few villages.

At the meeting of the Elwy and the Clwyd, the river becomes tidal and enters a narrow estuary rich with wildlife before discharging into the Irish Sea at Rhyl, in Liverpool Bay. 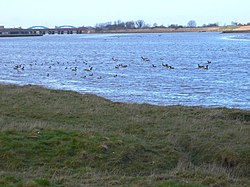 The Clwyd near Rhyl

In 1277 King Edward I sited a castle next to the Clwyd at Rhuddlan. In order for his supply barges to reach the castle, he employed 968 men to work on what was called 'The Great Ditch'. He straightened the three-mile stretch of river that ran from the castle to the sea. This was an enormous feat of engineering, compared even to today's modern standards, and it is still possible to make out the original loops and turns of the Clwyd using satellite imagery.