Llanarmon-yn-Iâl is a village and parish in Denbighshire, lying in limestone country close to the Flintshire border in the valley of the River Alyn. The ancient parish additionally extends into the latter county to the south-east.

The village sits on the B5431 road, near the junction with the B5430, six miles south of the market town of Mold.

The boundaries of the parish include, as well as the main village, the villages of Eryrys and Graianrhyd, along with a number of small hamlets and large areas of farmland. The parish lies mostly within the boundaries of the Clwydian Range Area of Outstanding Natural Beauty.

The village, considered the capital of the commote of Iâl (Yale)—the "fertile hill country"—grew up around a religious community dedicated to St Germanus of Auxerre (St Garmon in the Welsh language).[1] Pilgrims travelling to St Garmon's shrine, which contained an image of the saint reputed to have miraculous properties, probably financed the construction of the impressive church of St Garmon, dating from the 13th century. 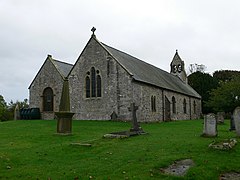 Near to the village, the lords of Iâl had constructed an earth-and-timber motte, Tomen-y-faerdre, during the 11th century, which seems to have acted as an administrative centre. King John rebuilt the castle in 1212 for his campaign against Llywelyn ap Iorwerth.[2] Just to the east of the village, close to the river, is a cave containing signs of Neolithic human habitation.

Llanarmon was located on several drovers' roads and owed much of its prosperity to the cattle which passed through on their way from Anglesey to the markets of England. In the nineteenth century it was one of the few places in north Wales where wheat was grown, through heavy treatment of the fields with lime, which also helped to create lush pasture for the drovers' cattle.[3] The local limestone quarries provided employment after the droving trade died out towards the end of the 19th century.

In the centre of the village can be found a small, traditional village shop and the Raven Inn public house, the last of the many drovers' inns that were once found in the village. Llanarmon is two miles from the A494, a main north–south trunk route, and three miles from the A525 and the A5104 roads.

The village is approximately 1½ miles east of the Offa's Dyke Path. The picturesque nature of the village, and the natural beauty of its surroundings, combined with proximity to major routes, make it a popular destination for walkers and other outdoor pursuits enthusiasts.