Llansilin is a village and parish in Denbighshire, about six miles west of Oswestry, Shropshire. The civil community, which includes Llansilin village, a large rural area and the hamlets of Moelfre and Rhiwlas as well as the remote hamlet of Llangadwaladr, had a population of 648 at the 2001 census.[1] The ancient parish is composed of 11 townships, one of which (Sychtyn) lies in Shopshire. Llangadwaladr forms its own ancient parish, surrounded by Llansillin.

The village was a primary location for the making of the film The Englishman Who Went Up a Hill But Came Down a Mountain which starred Hugh Grant.[2] The hilltop scenes were filmed on the Gyrn, the long hill that overlooks the village. It was also featured in Monk's Hood, an episode of The Cadfael Chronicles. 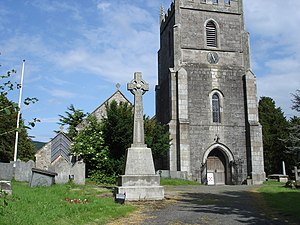 The church in Llansilin is dedicated to Saint Silin. The earliest part of the present building dates from the 13th century, although there had been a church on the site from much earlier times. Much of the present building dates from the early 15th Century. The wooden spire was destroyed by fire, and the present tower was built in 1832. There was a major restoration during 1889/1890, and the church was re-opened in June, 1890.

The churchyard contains the grave of Welsh poet Huw Morus, the "Nightingale of Ceiriog", and war graves of two British soldiers of World War I.[3] 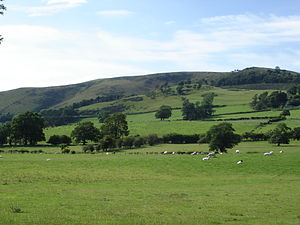