From Wikishire
(Redirected from Llangollen Rural)
Jump to: navigation, search

Llangollen is a small town in Denbighshire which stands on the steep banks of the River Dee and on the edge of the Berwyn mountains. It had a population of 3,412 in 2001.

Llangollen was an important coaching stop for the mail coach on the old mail route along the road from London to Holyhead (now the A5). It is now firmly on the tourist trail from which it derives its current prosperity.

Llangollen has always been predominantly a farming and agricultural area. Over the ages, most of the farms in the hills around the town would have been involved in sheep farming as they are today, and weaving was an important cottage industry in the area for centuries. Several factories were later built along the banks of the River Dee where both wool and cotton were processed.

The water mill opposite Llangollen railway station has been converted into a public house, "The Corn Mill". The building is over 600 years old and was originally used to grind flour for local farmers. 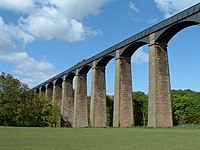 The town is best known for the dramatic Pontcysyllte Aqueduct bearing the Llangollen Canal over the valley. The canal was built as part of the Ellesmere Canal, which was planned to connect the coal mines and ironworks at Ruabon and Wrexham to the canal network and thence to the sea by ways of the River Mersey and the River Severn. The plans were altered and instead of connecting Trevor northwards to the sea along the route of the River Dee and southwards to the Severn, the canal instead ran eastwards to join on to the national network at Hurleston Junction on the (now-named) Shropshire Union Canal near Nantwich. A feeder (navigable to Llangollen) was constructed from the canal at Trevor to tap water from the River Dee at Llantysilio (at the weir called "Horseshoe Falls"). After company mergers, this canal became part of the Shropshire Union System. Until recently the canal was properly called the Llangollen Branch of the Shropshire Union Canal, though it is now known as the Llangollen Canal.

The canal supplied enough Dee water to supply Crewe and Nantwich, and when commercial carrying failed in the 1940s, it was this function as a water supply which kept the canal open. The canal is unusual amongst Britain's artificial waterways in having a strong current, of up to 2 miles an hour. Since the use of canals for leisure took off in the 1970s and 1980s, the route of this canal, twisting through beautiful Welsh hills and across the Dee Valley on the famous Pontcysyllte Aqueduct, has made it the most famous (and busiest) in Britain. The canal is an important part of Llangollen's attraction as a holiday destination. A new marina, built at the end of the navigable section, allows more summer visitors to moor overnight in Llangollen, but the beauty of the canal, and the manoeuvres of the multi-coloured narrowboats are attractions even for non-boaters.

Llangollen's name means "Collen's Church" from Saint Collen, a 6th-century monk who founded a church beside the river there.[1] St Collen is said to have arrived in Llangollen by coracle. As there are no other churches in Wales dedicated to St Collen, it is possible that this St Collen may also have connections in both Colan in Cornwall and Langolen in Brittany.

Standing high above the town to the north is Castell Dinas Bran, the former stronghold of the Princes of Powys. Beyond the castle is the limestone escarpment known as the Eglwyseg Rocks. The outcrop continues north to the area known as World's End. The area nearest to the castle is the Panorama Walk, and a monument to local poet Isaac Daniel Hooson (from the nearby village of Rhosllanerchrugog) can be found there.

Valle Crucis Abbey was established in nearby Llangwestl in about 1201, under the patronage of Madog ap Gruffydd Maelor of Castell Dinas Brân.

The bridge at Llangollen was built in about 1345 by John Trevor, of nearby Trevor Hall, who later became Bishop of St Asaph. It was extended to cross the railway when this was built in the 1860s and was widened in the early 1960s. The upstream side has new masonry which blends in with the older structure.

On the outskirts of the town is Plas Newydd ("New Hall"), where The Honourable Sarah Ponsonby and Lady Eleanor Butler (the Ladies of Llangollen) lived. 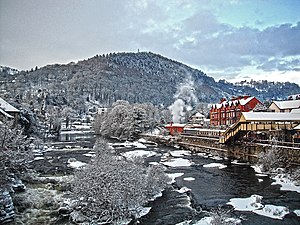 The River Dee and Llangollen Railway

The railway had been extended from Ruabon, by way of Acrefair and Trevor, to reach Llangollen by 1865, operating both passenger and goods services. This Ruabon Barmouth line later became part of the Great Western Railway. A hundred-year later the line was closed under the Beeching Axe in 1964, closing to passengers in early 1965, and then to freight in April 1969.[2] The line itself was lifted in May 1969.[3] However, part of the line was later restored and now operates as the Llangollen Railway, a tourist attraction. In 2002, the Rainhill locomotive trials were re-staged on this line.

Llangollen hosted the National Eisteddfod in 1908. The Gorsedd ceremony was held on the Hermitage Field, next to Plas Newydd, and the circle of stones were later moved into the grounds of the hall. The eisteddfod itself took place on the old Vicarage Field at Fronhyfyd and was visited by David Lloyd George, accompanied by Winston Churchill.

Since 1904, the town has been the home of the Llangollen Silver Band. The Brass Band perform at a wide range of local functions and concerts throughout the year. The band has a 'training' section, and provides free musical instruments and tuition to children and adults, many of whom go on to join the senior band.

The Llangollen International Musical Eisteddfod[4] is a week-long event held each year. It usually starts on the Tuesday, and ending on the Sunday of the same week. During the week people from all over the world take part in musical and dancing competitions. A parade, led by the Llangollen Silver Band, is usually held on the Tuesday of the Eisteddfod week, in which both the locals and visitors, take part dancing, singing, and playing musical instruments, whilst marching the streets of Llangollen.

The Llangollen Fringe Festival[5] is an independent arts festival, usually held in mid July. Initially the festival was held in a tent on a playing field, and later a weaver's shed. It is now held in the Town Hall. The Fringe includes music, comedy, theatre, dance and workshops.

Dee Rocks [6] is a local fundraising music event bringing much needed financial support to the smaller local good causes that tend to get overlooked on a national, or county level. Dee Rocks night is usually held during May when the Town Hall is transformed into a music venue on an incredible scale. All the organisers, performers, sound engineers, lighting crew, stagehands and many others contribute their time and effort free-of-charge to provide an event that is second-to-none for both entertainment and reward in the locality.

The inaugural Dee Rocks, originally intended to be a one-off event, took place on Saturday 29 May 2004 but, such was the success of the night, demand ensured Dee Rocks would return and, with Dee Rocks VI having taken place on Saturday 22 May 2010, it has now become an annual fixture in the town raising in excess of £12,000 for local good causes.

An integral part of the Dee Rocks experience, is the "Styes in Their Eyes" finale when local characters take to the stage to entertain and dazzle the audience with their party pieces. The flamboyantly dressed singers and novelty acts dive headlong into the spirit of the event as they each perform their chosen song with the live band.

A number of traditional songs and nusery rhymes have Llangollen as a theme, such as:

White water slalom canoeing and kayaking take place on the Dee in the town, which has hosted British and international.

Llangollen Cricket Club, football and rugby union teams play at Tower Fields above the town and at the International Eisteddfod field and pavilion.

Paragliders come here to make use of the thermals rising up the valley sides to the south of the town and walkers and mountain bikers take to the hills. A more leisurely pursuit is enjoyed by hose in canal boats.

Llangollen was the finishing point of the first massed-start cycle race held on British roads, on 7 June 1942. The 59-mile Wolverhampton-Llangollen race was organised by Percy Stallard in defiance of the sport's governing body, the National Cyclists' Union, but with approval from all police chief constables through whose districts the event ran.