Esclusham is a parish in Denbighshire to the south-west of Wrexham.

The parish includes the villages of Bersham, Rhostyllen, Aber-oer, Llwyneinion and Pentre Bychan, as well as a number of smaller settlements, the park at Erddig, and an area of the Ruabon Moors west of Aber-oer known as Esclusham Mountain.

The name is recorded as Esclesham or Esclusham as early as 1315, likely originating in a combination of the Old English personal name Æscel with ham, "settlement"; the name is locally pronounced with stress on the second (middle) syllable, probably due to the influence of Welsh language stress patterns.[1]

[...] the towneshipp of Esclusham, beeing part of ye said manno', is bounden from Minera by a little purle of water running from the mountayne called Glas-bry, downe by the landes called Tir Kelin, and so to Clywedog vpon ye west by the landes of Hugh ap Robert ap Howell in ye manno' of Minera, and part of Glasbrie, and part of ye mountayne towardes y Groes Newydd ; but the certaine boundes vpon ye said mountayne they cannot sett downe. And from Mortyn Wallicoru'[2] by a brooke called Holbrooke, through certaine feildes with certaine markes knowne, to a place called Aberderryn, and from thence to a place called Penissa Maeswdd Kynelleth to a brooke called yr Avon Ddu ; and from Morton Anglicoru'[3] the said Avon Ddu doth bounde to ye towneshipp of Erddig, and from thence to Clywedoge, ioyning to ye towneshippe of Bersham in ye said manno'.[4]

The jurors noted that "vpon ye mountaynes and commons in and about this manno' do breed moore cockes (red grouse) and growes, w'ch gentlemen of ye countrey of Chesshire and other places do hawke and take them at some seasons of the yeare".[4] 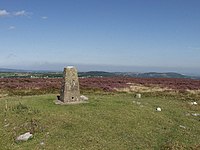 The parish has a total area of 4,092 acres and had 3,401 inhabitants at the 2001 census.[6] Its eastern part is relatively urbanised, with the village of Rhostyllen being close to the suburbs of Wrexham. In the western, rural part of the community the land rises to the high pastureland and moorland above Fron-deg and Aber-oer known as Esclusham Mountain.

Until the early 20th century there were lead and zinc mines on the mountain, and the area was used for grouse shooting. There are several structures of interest in industrial archeology, including the Bersham Ironworks and old lead workings. The Minera Caves, a Site of Special Scientific Interest, lie beneath Esclusham Mountain: over five miles of caves connecting with the old lead workings have now been mapped.[7]

Bersham Colliery was a large coal mine in Rhostyllen which employed over 800 men.