Ruabon is a village and parish in Denbighshire located 4½ miles south of Wrexham. The name "Rhiwabon" comes from "Rhiw Fabon", "Rhiw" being the Welsh language word for "hill" and "Fabon" being a mutation from St Mabon, the original church name, of earlier, Celtic origin. An older spelling, Rhuabon, can sometimes be seen.

There is evidence that a settlement existed in Ruabon in the Bronze Age. In 1898, building works in the centre of Ruabon exposed a cist or stone urn containing cremated human remains dating from 2000 years BC. In 1917, the remains of a Bronze Age round barrow were discovered on the playing fields of Ruabon Grammar School; they contained human remains, a flint arrowhead and a bronze axe.

Overlooking Ruabon is The Gardden, an ancient hill fort surrounded by circular ditches, dating back to the Iron Age.

In the 1850s the writer George Borrow toured Wales and wrote an account of his journey in the book "Wild Wales":

“Rhiwabon … a large village about half way between Wrexham and Llangollen. I observed in this place nothing remarkable, but an ancient church. My way from hence lay nearly west. I ascended a hill, from the top of which I looked down into a smoky valley. I descended, passing by a great many collieries, in which I observed grimy men working amidst smoke and flame. At the bottom of the hill near a bridge I turned round. A ridge to the east particularly struck my attention; it was covered with dusky edifices, from which proceeded thundering sounds, and puffs of smoke. A woman passed me going towards Rhiwabon; I pointed to the ridge and asked its name; I spoke English. The woman shook her head and replied "Dim Saesneg" (English: "No English"). "This is as it should be", said I to myself; "I now feel I AM in Wales."

The Williams-Wynn family were major landowners. For centuries they had a great influence on the political, cultural, social and literary life of Wales. Although the family owned several houses throughout Wales, the seat of the family was at Wynnstay in Ruabon. The fifth baronet became so powerful that he was given the unofficial title of "Prince of Wales".

Wynnstay had passed into the possession of the Wynn family (as they were then known) through marriage. The estate, originally known simply as Rhiwabon, was owned by the Eyton family who later changed its name to "Watstay". On inheriting the estate, Sir Watkin Williams-Wynn took on the additional surname of Wynn and commissioned the building of a new mansion, to be known as Wynnstay, to replace the original building. 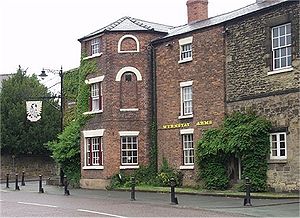 The arms of the Williams-Wynn family show an eagle with the Welsh motto "Eryr Eryrod Eryri" which translates into English as "The Eagle of Eagles of the Land of Eagles", the "Land of Eagles" being Snowdonia and reflecting the family's origins in that part of Wales.

Parts of the grounds were landscaped by Capability Brown and the park was regarded as one of the largest and most important in Wales, containing several important monuments: a column by James Wyatt, erected in 1790 as a memorial to the fourth baronet; the Nant y Belan Tower and the Waterloo Tower.

In 1858 the 'old' Wynnstay was destroyed by fire, with many valuable manuscripts being lost. Sir Watkin built a new mansion on the same site. During the Second World War the hall and part of the park became the headquarters for the Royal Engineers Survey, a specialist branch of the RE responsible for providing training for sappers who staffed the mobile Map Production units which were part of all British Army operations. RE Survey moved out in 1946. There was also a fire in the stables adjoining the hall during the same War while the hall was used as billeting for officers.

Owing to heavy death duties, the Williams-Wynns moved from Wynnstay to nearby Plas Belan, a house in the estate grounds, and finally left Ruabon forever in 1948, severing a link with Ruabon of over two centuries. Lady 'Daisy' Williams-Wynn continued to live at Belan for much longer than 1948. Much of the estate was put up for sale and the house became a private school, Lindisfarne College (which took its name from the island of Lindisfarne in Northumberland although it had no connection with the island). The school itself closed in bankruptcy in 1994 and the house was converted into luxury flats.

The organ at Wynnstay was built by John Snetzler in 1774 for Sir Watkin Williams-Wynn's London home in St. James's Square but was moved to Wynnstay in 1863. During the sale of Wynnstay and its contents, the organ, and many other treasures, were acquired by the National Museum in Cardiff.

The woodlands within the estate were taken over by the Forestry Commission and the trees were felled and replaced by conifers. Further destruction took place when parts of the estate grounds were built over during the construction of the Ruabon bypass.

The Ruabon area was once heavily industrialised with large deposits of iron, coal and clay. Iron was worked in Gyfelia and Cinders as far back as the Middle Ages but heavy industry dominated the entire parish in the 18th and 19th centuries. Coal was extracted from pits at the Green, Plas Madoc, Plas Bennion, Wynn Hall, Afon Eitha, Cristionydd, Groes, Plas Isaf, Plas Kynaston, Gardden, Brandie, Aberderfyn, Ponkey and Rhos, but many of these were hit by flooding in 1846 and ceased production. Later collieries were built at Wynnstay, Vauxhall and Hafod. Hafod Colliery was sunk in 1867 to replace the former Wynnstay Colliery (whose Engine House and Fan House can still be seen on either side of the B5605 to Rhosymedre) after flooding caused it to close in the 1850s. Hafod, at first called New Ruabon Colliery, was once the biggest employer in the area. It closed in 1968. The colliery’s coal tip has since been preserved as Parc Bonc yr Hafod. The last colliery to work the Ruabon coalfield was Bersham, which at once stage connected with Hafod Colliery underground. Bersham Colliery closed in December 1986.

Iron was worked at Ruabon; Acrefair; Cefn Mawr and Plas Madoc; and zinc at Wynn Hall. One of the main companies was the British Iron Company and their successors, the New British Iron Company, who operated ironworks and collieries at Acrefair from 1825 to 1887. In 1867 Robert Graesser, an industrial chemist from Obermosel in Saxony established a chemical works at Plas Kynaston in Cefn Mawr to extract paraffin oil and wax from the local shale. This was the start of the long association between the chemical industry and Cefn Mawr. Much of the mineral wealth of the area was exported by canal over the Pontcysyllte Aqueduct on the Shropshire Union Canal, until the railway reached Ruabon in 1855. The site was later acquired by the United States chemical company Monsanto, their first venture in Europe, but in 1995 it was sold and renamed Flexys, a specialist in chemicals and additives for the rubber industry. The site was later operated as Solutia[1] but closed in 2010.

At Afongoch there were three clay companies very close together:

At Hafod, the Cornish engineer Henry Dennis founded a clay works next to the Hafod Colliery. The Dennis Company became world famous for its tiles and still operates today.

At Cinders, the "Wynnstay Brickworks" was to the right of the Ruabon-Overton road near Cinders Farm. It produced bricks, tiles and drainage pipes for the Wynnstay estate.

Ruabon is connected to the national railway network by the Shrewsbury to Chester Line which was formerly part of the Great Western Railway mainline from London Paddington to Birkenhead Woodside. Intercity services call at Ruabon railway station en route to destinations including Cardiff, Birmingham, Chester, Manchester and Holyhead. Former services included the WSMR service to London. The railway here was also the junction to the now closed Ruabon to Barmouth line, along sections of which now run the Llangollen Railway, Bala Lake Railway and the Mawddach Trail, now a cycle track.

The British merchant ship Ruabon, a steamer of 2,004 GRT, was captured and sunk by German U-boat U-20 on 2 May 1916. The ship was torpedoed about 160 miles W by S of the island of Ushant in Brittany en route from Seville to Troon. The ship was owned by John Cory & Sons of Cardiff.

The Ruabon National School, a Church of England foundation, was built on Overton Road in the late 1840s. It later became St Mary's Church in Wales School and was completely rebuilt on the same site in 1976.

To cope with an expanding population another school was provided by Denbighshire Education Committee on Maes y Llan and opened in 1912. This later became Ysgol Maes y Llan.

Lindisfarne College, an independent school, moved from Westcliff-on-Sea in Essex to Wynnstay in 1950. The school closed, through bankruptcy, in 1994.

The village is home to pubs, a bank and a post office on its high street. There is also a pharmacy operated by Rowlands which serves the local population. As of July 2012, an old industrial unit on the former Ruabon Industrial Estate has a planning application submitted by developers Capital & Centric Plc for a new supermarket on the disused site, potentially creating 300 jobs for the area.[2] Ruabon is served by the A483 trunk road which bypasses the settlement just to the east.