Llanrwst is a small town in Denbighshire standing on the eastern bank of the River Conwy and on the A470 road. The town's name means "Church of Grwst", which is taken from the 5th century to 6th century Saint Grwst, after whom the parish church is named.

The population of the town was 3,037 according to the 2001 Census, and 65% of the inhabitants were Welsh-speakers. 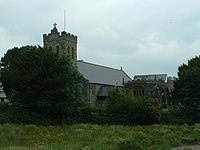 The Parish Church of the Church in Wales is St Grwst. It stands on the banks of the Conwy close to the centre of the town.

When the first church was built here cannot be said for certain, but the St Grwst from whom it takes its name flourished in the 6th Century, and he might have had his cell in the area, and a church might have been founded around this time. A church was by the river in the 12th Century and rebuilt in 1470 on the sama spot, which is essentially the church we see today. It underwent a Victorian restoration in the late 19th Century.

St Grwst's has some remarkable Victorian carving of the sort which would not have survived the Reformation; a carved oak rood screen whose tracery carries in detail the Instruments of the Crucifixion: a ladder, nails, spear, crown of thorns.

Within the church is Gwydir Chapel, which dates from the early 17th century. The chapel contains memorials to the Wynn family of Gwydir, and also contains the old stone coffin of Llywelyn the Great (Llywelyn ap Iorwerth).

Churches of Llanrwst include:

The growth of the town in the 13th century was considerably aided by an edict by Edward I of England, who built Conwy Castle, prohibiting any Welshman from trading within 10 miles of that town. Llanrwst is 11 miles from Conwy, and therefore it was the ideal market place.

Lanrwst grew around wool, and indeed for a long time the price of wool for the whole of Britain was set here. Llanrwst also became renowned for harp manufacture, but today, lying as it does in Snowdonia, its main industry aside that of being a market town is tourism. 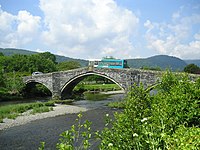 The town is served by two railway stations; Llanrwst and North Llanrwst on the Conwy Valley Line. It was originally envisaged that the railway would pass closer to the river (on the site of today's Central Garage), and the one-time grand-looking Victoria Hotel was therefore built opposite the bridge in anticipation of this. Had the railway line been built on the west shore of the river Conwy, as originally planned (to serve the inland port of Trefriw, located across the river from Llanrwst), it is unlikely that Llanrwst would ever have achieved its present status. Indeed, at one time Llanrwst was the eighth largest town in Wales, its population being greater than that of Cardiff.

A major feature is the narrow three-arch stone bridge, Pont Fawr. It is said to have been designed by Inigo Jones and it was built in 1636 by Sir John Wynn of Gwydir Castle. The bridge connects the town with Gwydir, a manor house dating from 1492, the fifteenth-century courthouse known as Tu Hwnt i'r Bont and also with the road from nearby Trefriw. Originally built to carry horses and carts, the bridge has stood up well to modern traffic, not to mention the regular floods.

In 1610 Sir John Wynn of Gwydir constructed the historic Llanrwst Almshouses to house poor people of the parish. The buildings closed in 1976, but were restored in 1996 with the aid of Heritage Lottery funding, reopening as a museum of local history and a community focal point. The museum currently holds a collection of over a hundred items relating largely to the rural Conwy valley, and a number of items are associated with the renowned Llanrwst Bards of the late nineteenth century.

The Gwydir Forest lies to the south west of the town, beyond the bridge.

On the hills above the town is the Moel Maelogan wind farm. The electricity generated by these turbines is sent to the sub-station in the town.

Llanrwst hosted the National Eisteddfod in 1951 and 1989. An elevated view of Llanrwst from Gwydir Forest

The town's motto is Cymru, Lloegr a Llanrwst; "Wales, England and Llanrwst". There are a number of stories about how this came about.

In 1276 Llywelyn ap Gruffudd, Prince of Wales, also known as Llywelyn the Last, seized the town, declaring it a "free borough" independent from the diocese of Llanelwy. Although the bishop went as far as to seek the help of the Pope to overturn this, his attempts failed, Llywelyn pleading a close family tie to the place as a reason for safeguarding it, but in the event the argument was terminated by the death of Llywelyn in battle in 1282 and the dissolution of Gwynedd.

The bishop of Llanelwy still failed to gain authority over the town, and the Cistercian monks of Aberconwy Abbey (where Llywelyn the Great, Llywelyn's grandfather, had died in 1240) insisted that it be allowed to keep the independence which had belonged to it for 29 years, and ripped down any banners related to the Bishopric or to Edward I.

According to the other tradition, Llanrwst was omitted when Gwynedd was divided among the Fifteen Noble Tribes of North Wales. Thus Llanrwst was reckoned as not being in Gwynedd (roughly speaking North Wales), and it certainly was not in England, hence the saying Cymru, Lloegr a Llanrwst.

In 1947, Llanrwst town council apparently (there is no record of this in the online minutes of the Security Council) made a submission to the United Nations for a seat on the Security Council, stating that Llanrwst was an independent state within Wales. The diplomats rebuilding a world shattered by war were not impressed.[1] 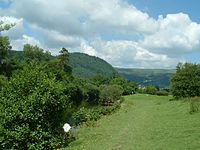 The River Conwy at Llanrwst

The motto "Cymru, Lloegr a Llanrwst", a testament to this apparent independence, has now become better known through the song of that title, by local band Y Cyrff.[1]