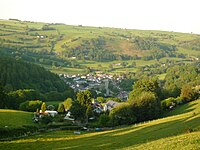 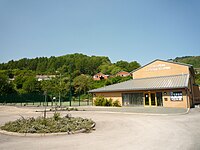 Glyn Ceiriog being the principal village for the Ceiriog Valley, it is home to many of the Valley’s resources, namely: 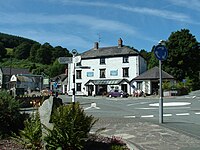 Glyn Ceiriog was once the home of extensive slate quarries and the Glyn Valley Tramway was built to take the slate to a wharf on the Shropshire Union Canal and later to interchange sidings with the Great Western Railway line from Chester to Shrewsbury.

Bus services operate to Llangollen via Chirk and to Llanarmon Dyffryn Ceiriog on service 64. Infrequent services on route 65 connect the village to Wrexham via Ruabon.

Rail services are available from Chirk, five miles away.

Four miles west of Glyn Ceiriog is the country house and estate of Plas Nantyr. It forms part of the ancient manor of Cynlaeth Owen which Owain Glyndwr inherited from his father in the late 14th century. In the 19th century, the estate was owned by Mr Tyrwhitt, a barrister and the Recorder of Chester. Following Mr Tyrwhitt's death in 1836 his family emigrated to Canada and named the place where they settled Nantyr. At his death the Estate was sold to the Myddleton-Biddulphs of Chirk Castle, from whom it was bought by Sir Thomas Storey in 1892. [1]

A number of Welsh literary figures have lived in or near Glyn Ceiriog in the past. The 15th-century poet Guto'r Glyn (1435 - 1493) is associated with Glyn Ceiriog. The 17th-century poet Huw Morus (Eos Ceiriog) (1622 - 1709) was born, and lived, near Glyn Ceiriog. The 19th-century Eisteddfod-winning poet and lexographer, Rev. Robert Elis (1812 - 1875) was a Baptist minister at Glyn Ceiriog Independent Welsh Baptist Chapel, Seion, from 1838-1840. The Welsh novelist Islwyn Ffowc Elis spent most of his childhood on a farm near Glyn Ceiriog, although he was born in Wrexham. Additionally, Lancelot Hogben an experimental zoologist and medical statistician, lived there from the late 1950s until his death.