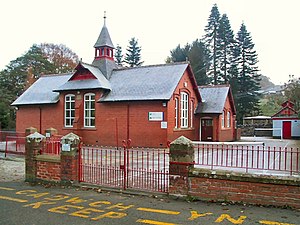 Cyffylliog is a village and parish in Denbighshire. It is situated to the west of Ruthin on the banks of the River Clywedog. The parish covers an area of 7,800 acres and includes the hamlet of Bontuchel and a section of Clocaenog Forest.[1] It had a population of 495 at the time of the 2011 census, a slight increase from 484 during the 2001 census.[2][3] The name of the village means "place of pollard trees/stumps" and comes from the Welsh word cyffyll meaning stumps.[4]

The village has a small primary school, Ysgol Cyffylliog, which had 25 pupils in 2011.[5] The village church, St. Mary's, dates from the late 12th century but has been extensively renewed since that time including an almost complete rebuilding in 1876.[6] The village also has a Presbyterian chapel, Salem Chapel.[7]

The church of a remote and attractive village in the wooded Clywedog valley (signposted from Llanfwrog). Heavily restored, it retains a late mediæval ceiling and an unusual Georgian ‘hearse house’.[8]