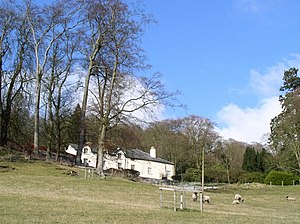 Bryneglwys is a village and parish in Denbighshire close to the border with Merionethshire. The village lies to the north-east of Corwen on a hill above a small river, Afon Morwynion. The parish covers an area of 6,050 acres and extends to the top of Llantysilio Mountain.[1] It had a population of 369 at the time of the 2011 census, an increase from 344 during the 2001 census.[2][3] The name of the village means "church hill" and was first recorded in 1284 with the spelling "Breneglus".[4]

The village church is dedicated to Saint Tysilio.[4] There has been a church on the site since the 7th century but the current building dates from the 15th century and was restored around 1570 and again in 1875.[1][5] Yale Chapel was added to the church around 1575.[1]

The local primary school is Ysgol Dyffryn Iâl which has two sites, one in Bryneglwys and one in the nearby village of Llandegla. It is a bilingual school under the control of the Church in Wales.[6]

The 16th-century historian David Powel came from the village.[1] To the north-east of the village stands Plas yn Iâl, the ancestral home of the Yale family who included Elihu Yale, a benefactor of Yale University in the United States.[1]

This Denbighshire article is a stub: help to improve Wikishire by building it up.