Llandegla or Llandegla-yn-Iâl is a village in Denbighshire and an extensive parish that crosses the border into Flintshire. In the 2001 census, it had a population of 494.

The village is named after Saint Tecla, the patron saint of the village and parish church: Llandegla-yn-Iâl can be translated as "St Tecla's church in [the district of] Yale". Iâl - later the Hundred of Yale - is a district whose name means "the fertile hill country"; it was formerly a lordship (or commote under the mediæval Welsh system of administration) granted by Gruffydd ap Llywelyn, the king of Powys, to Llewelyn Aurdorchog.

The estate of Plas yn Iâl in the village was the seat of the Iâl family, whose most well-known member is Elihu Yale, a governor of the British East India Company. Elihu made a substantial gift towards the founding of an educational institution in New Haven, Connecticut. This led to the college being named Yale College, now Yale University.

Llandegla is located 830 ft above sea level in the upper valley of the River Alyn just off the A525 road between Ruthin and Wrexham. The boundaries of the parish include both the village of Llandegla itself and the neighbouring village of Pen-y-stryt.

St Tecla's church is likely to have been an early-mediæval foundation, and by the 13th century was recorded as a chapelry of Valle Crucis Abbey. The fabric of the building was, however, heavily rebuilt in 1866, probably to a design by John Gibson.[1]

The village was located on one of the main drovers' roads from the north-west coast of Wales to the markets of England, and the cattle trade was central to its economy. Thomas Pennant wrote that it was "noted for its vast fairs for black cattle", and there were formerly several inns in the village to cater for the drovers and cattle-dealers.[2] George Borrow, in his travelogue Wild Wales, recorded meeting a hog-dealer on the road above Eglwyseg taking a large herd of pigs across the mountain from "Llandeglo" towards Wrexham.[3]

As the droving trade tailed off in the later 19th century, due to the construction of the railways, many of Llandegla's residents worked in quarrying. 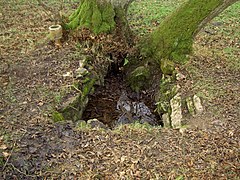 St Tecla's well. Its use was discouraged by the church after the 19th century

Pennant recorded an odd tradition connected with St Tecla's Well, a spring in a field close to the church. Sufferers of what were known as Clwyf Tecla, "St Tecla's disease", washed themselves in the well after sunset and walked round it three times, leaving an offering of fourpence, afterwards spending the night in the church.[2]

The nineteenth-century folklorist Elias Owen recorded a tale about a "wicked Ghost" which haunted the rectory at Llandegla and was eventually exorcised by a man named Griffiths from Graianrhyd. The spirit was said to have been buried in a box under a large stone in the River Alyn close to Llandegla's bridge.[4]

Natural features in the area include the Clwydian Range to the north-west of the village, Llandegla Forest to the south-east and the Horseshoe Pass to the south. The Offa's Dyke Path passes through the village. Llandegla also has a mountain bike centre located in the forest.