Pentrefoelas is a village and parish in Denbighshire. The village lies on the A5 road between Betws-y-coed to the west and Cerrigydrudion to the east. The Merddwr river, a tributary of the River Conwy, flows through it. The parish had a population of 339 at the time of the 2001 census.[1] It has an area of 13,300 acres and covers a large region around the village including part of Mynydd Hiraethog, Llyn Alwen and part of Alwen Reservoir.[2]

The name of the village comes from pentre (Welsh language for "village") and a nearby hill, Foel Las ("green bare-topped hill").[3] The hill is the site of a motte built around 1164 in the time of Owain Gwynedd. Old Voelas House, home of the Wynne family, was built at the foot of the hill in 1545. It was demolished in 1819 and a new site was established a mile to the west. The current Voelas Hall was built in 1961 and was designed by the architect Clough Williams-Ellis.[2] 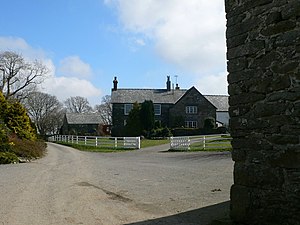 Other houses around the village include Plas Iolyn, home to the 16th-century MP Ellis Price and his son, the poet Tomos. It is now a farmhouse.

Y Giler, built in the 16th century, was the home of the poet Rhys Wyn and is now a pub.[2] The village had a chapel in medieval times but the site of the current church was first used in the 1770s and the current building dates from 1857–1859.[4]