Coedpoeth is a village and parish in Denbighshire situated to the west of Wrexham.

The etymology of the placename is from the Welsh language coed "wood" with poeth meaning, in its original sense, "burnt",[1] although the modern Welsh word translates as "hot". The name therefore translates roughly as "burnt wood", perhaps referring to the charcoal burning heritage in the village and local woods.

In its early history the area known as Coedpoeth was not a settlement, but was described (in 1411) as a "waste" - an uncultivated area - and later as a "common", presumably a wood with rights of common, in the upper part of the township of Bersham.[1] Even as recently as 1832, the village of Coedpoeth did not yet exist as it currently does, and was instead four small hamlets. The Nant (from the Welsh word nant, a stream or brook) to the south possessed two mills on the River Clywedog: Adwy'r Clawdd (literally "the gap in the dyke") to the north-east was named after a gap in Offa's Dyke. The Talwrn (from Welsh talwrn, a cockpit) in the valley of the River Gwenfro to the north, was home to several small-scale coal mines, and the name of the Smelt, to the west, referred to smelting of lead in the area. These four hamlets became areas of Coedpoeth which grew, due to increasing industrial development of the area, around the inns and market hall on the ridge that became the high street of the village. The changes in population were reflected by a new church opening in 1875, with a replacement stone-built church, dedicated to St. Tudfyl, being opened in 1895 as a "chapel of ease" within the ecclesiastical parish of Minera.[2] By the 1860s, the village was named Coed Poeth, and this form of the name remained up until the 1940s at the latest. The majority of 18th to early 20th century buildings in the village are constructed from local sandstone quarried at Penygelli quarries, with later examples being built with Ruabon red brick.

Traditional methods of employment included the areas many coal mines, lead mining and smelting at Minera Lead Mines and the Smelt, and quarrying, in the nearby Penygelli, Berwig, and Minera quarries, all served directly by local railways. The late 20th century, however saw a decline in the area's traditional industries, and all have now disappeared. Today Coedpoeth is a dormitory village supporting people who work in Wrexham, and a point of sale for goods used by local farms and hamlets. There are still many small businesses in the village centre along the high street; However, these small shops face fierce competition from large retail chain stores in Wrexham.

The village was surrounded by natural resources such as lime, iron ore, coal, and lead, and many ruins show the industrial past of the area. The earliest industry was lead smelting and an area of the village named "The Smelt" contains street names referencing the industry.

Coal mining in Coedpoeth is documented from the early 15th century. Limited and shallow extraction took place throughout the 18th and 19th centuries in order to satisfy the needs in particular of the local iron industry. However, significant extraction did not begin until the sinking of the first deep shafts in the early 20th century, and now little remains of the industry. Of the collieries, a number of colliery waste tips survive, now grown over, and the remains of shallow workings and bell pits are relatively common in some areas, with scheduled examples near Nant Mill. The most significant remains of the industry exist at Plas Power, where many buildings survive after reclamation of the waste tips in the 1990s. The owners of this colliery were also the owners of Plas Power Hall, which was built in 1757 by the Myddleton family, the name being changed to match an early owner, Sir Henry Power. The hall was damaged during a fire and demolished in 1951; but the stables remain after a campaign to list them led by Councillor Gordon Roberts of Middle Road. The estates boundary wall remains, and fills the gap between Coedpoeth and Wrexham, and the northern boundary is followed by the A525 road apart from modifications with the A483 junction.

The village once had its own railway station on the Wrexham and Minera Railway of the Great Western Railway — albeit in name only as it was sited in the parish of Minera. A campaign was launched in 1905 by the business people of Coedpoeth to have a branch line laid from the station to the village centre, one mile distant. Local businesses claimed the station's location was of little benefit to them. The Great Western Railway company did not share a similar opinion and the campaign was abandoned in 1906. In 1914, the original station buildings were destroyed in a fire set by militant suffragettes.[3]

Originally offering through services to two further halts on the line; Vicarage halt serving western Minera, and Berwig Halt, the station was a passenger terminus from 1926 and eventually passenger services were withdrawn from 1930, although heavy goods use of the line continued for Berwig Quarry and Minera Limeworks until closure of the line in 1970 after the Limeworks was reduced to a base for road aggregates and was served by road.

Bus services first came to the village in the 1920s first offered by the local government's Wrexham & District Transport Co. Ltd bus service from Wrexham, and followed by Great Western Railway's own bus services. Eventually Crosville Motor Services expanded into the area, and remained up until Arriva North West and Wales came to manage all of their services, vehicles and depot in the area.

Today, the village is linked to Wrexham by two bus services. There is also a night-time service, as well as all routes through the village going on to Ruthin and Denbigh, which now also stop along the high street. 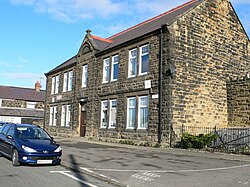 Coedpoeth has two schools Penygelli and Ysgol Bryn Tabor (a Welsh-medium school). Originally one school in a Victorian building located to the North of the A525, Ysgol Penygelli was split into an infants school incorporating a nursery year and years 1-2, and a junior school, incorporating years 3-6. The junior school is a feeder for the secondary school Ysgol Clywedog, in nearby Wrexham. A Welsh language school, Ysgol Bryn Tabor, shared the same complex as Penygelli Infants to the South of the A525, which was part early 20th Century, with a large 1980's extension. Originally the local education authority planned to refurbish the original building on the North side of the road, but after a fire which destroyed the wooden beams supporting the original slate roof, this building was demolished and materials reclaimed for an affordable housing scheme on the site. As a result of the loss, a new school complex was built and opened in July 2006, on the playing fields of the newer school, and Penygelli Infants and Penygelli Juniors are now one school again.[4] Ysgol Bryn Tabor then expanded into the old Penygelli Infants site. The old junior school building was left vacant until demolition during March 2007. The site was then used for a new community centre and hall, named Plas Pentwyn.[5] Pentwyn being the name of a farm that once stood nearby belonging to the Powell family.

The original local library was a Carnegie Library built in 1904 as Coedpoeth Free Library. It cost £1,500 at the time, all of which was donated by Andrew Carnegie, the Scottish-American Steel magnate. It was built using the same local sandstone as other buildings in the village, from quarries nearby, and stands opposite the villages memorial park and bowling greens. When opened, the ground floor featured a billiard table in a games room, as well as a refreshments room, with the rear of the building used for meetings of the local parish government. The first floor was where the reading room, which could also be used as a lecture room, was located. As the library was modernised, the library itself was moved to the large game room on the ground floor, and the remainder of the building dedicated to being the community councils headquarters.

As use of the old library increased, it became crowded, and the facilities were deemed to be to inadequate. When Plas Pentwyn was constructed, room for a new library was provided, leaving the sole purpose for the old Carnegie Library as the headquarters for Coedpoeth Community Council, which has had a growing role in recent years.

Coedpoeth is located on a hill between the Clywedog and Gwenfro valleys, surrounded by countryside with views of the Cheshire plain, Tanyfron, Southsea and the town of Wrexham.

The highest point of the village is Rock Place at 800 feet above sea-level. The neighbouring village of Bwlchgwyn, is one of several claiming to be the highest village in Wales, at 1,090 feet.

The area is prone to snowfall, and has suffered localised flooding in recent years due to heavy rain. Welsh Water significantly invested in new drainage for the village in 2012, alleviating this problem.[6][7]