Llysfaen is a village and parish in a detached part of Caernarfonshire locally situate in Denbighshire.

Llysfaen located half a mile inland, halfway between the coastal towns of Abergele and Colwyn Bay. Neighbouring villages include Old Colwyn, Llanddulas, Dolwen and Betws-yn-Rhos. To its immediate west is Mynydd Marian, a mountain known for its limestone grassland and the rare dwarf sub-species of the Silver-studded Blue butterfly. Llysfaen also holds spectacular views, overlooking the Irish sea, as well as Kinmel Bay, Rhyl, and the Prestatyn mountains.

The name, Llysfaen is from the Welsh language for stone court (i.e. a court built of stone). 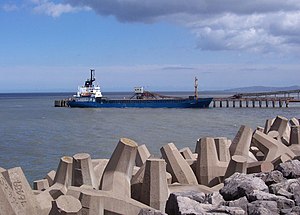 Throughout much of Llysfaen's recent history, many of its villagers worked at the nearby Llysfaen and Llanddulas Limestone Quarry from where lime was shipped to Liverpool or Fleetwood using Raynes Jetty in Llanddulas Bay.

The village has a small number of facilities including a primary school, Ysgol Cynfran, accepting pupils from nursery age to 11; a convenience store; the mediæval St. Cynfran's parish church (see below); the village hall; a playgroup; three parks, two telephone boxes, and two post boxes. A Mobile Library run by Conwy Library Service also calls at the village every three weeks [1]

Llysfaen currently has a number of youth football teams catering for ages from 7 to 18 and a men's team too. A majority of the teams' games are played on the village's Banana Pitch, so called because it dips heavily in the middle. The names of the teams are themed on big cats (e.g. the Snow Leopards, the Bobcats, Lions and The Llysfaen Village Platoon.

Llysfaen has a bowling green which is home to a locally well-known lawn bowls team and a MUGA where Netball, Tennis and Hockey is played. 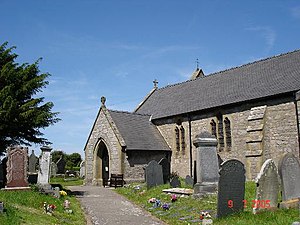 The patron saint of Llysfaen is Saint Cynfran, who is traditionally believed to have, in 777, founded the eponymous church in the village, above whose entrance is a carving in rock of the saint. The primary school is also named after Cynfran.

In the 1254 Norwich Taxation, Llysfaen was recorded as Ecc'a de Llesvaen, and in the 1291 taxation as Rectoria di Lisnaen and taxed at £4.

St. Cynfran's church has been rebuilt a number of times; the current twin-naved building is said to date from 1377 but is believed to incorporate stones from the original church. In 1870, the building was the subject of an extensive £1,950 internal restoration with only a few panels remaining from the Middle Ages, although the mediaeval stone walls remain. The rectilinear churchyard contains memorials going back as far as the 17th century. The churchyard is surrounded by a stone wall with yew trees both in and outside the walls, and there is a holy well, the Ffynnon Gynfran, about 100 yards to the north.

The ancient parish of Llysfaen forms an exclave of the hundred of Creuddyn, and comprised the townships of Isallt, Isyffordd, Pant (or Tre'r Pant), Penmaen and Rhwngyddwyffordd. According to the Royal Commission of the Welsh Church, the parish had a population of 585 in 1831 rising to 1,489 in 1901.

In 1873, the local lime quarrying firm, Raynes & Co. Ltd, was established by James Trevelyan Raynes II to make sodium carbonate and limestone dust for use in glass manufacture. [2]