Rhos-on-Sea otherwise Llandrillo, is a seaside resort and parish in Denbighshire. The population was 7,110 in 2001.[1] It is a mile to the north-west but effectively a suburb of Colwyn Bay, on the coast. It is named after the kingdom of Rhos established there in late Roman times as a sub-kingdom of Gwynedd, and later became a cantref (hundred).

Bryn Euryn is a hill overlooking Rhos-on-Sea on which there are the remains of a hillfort called Dinerth, the 'fort of the bear', and a limestone quarry.[2] Ednyfed Fychan, 13th-century seneschal to Llywelyn the Great and ancestor to the House of Tudor was granted the land and built a castle on the hill, of which all traces have disappeared, and a manor, Llys Euryn of which the ruins of its 15th-century reconstruction can be seen today.[3]

The 6th century St Trillo's Chapel, which was the mother church of a large parish which included places as far apart as Eglwysbach and Eglwys Rhos (Llan Rhos). 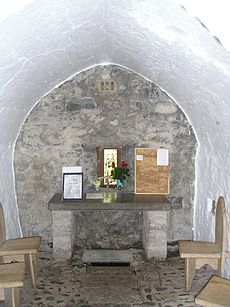 The chapel by the sea is on the site of a pre-Christian, sacred holy well; the altar is built directly over the pure water of the well. Saint Trillo, the son of Ithel Hael from Llydaw (Snowdonia) also founded a church at Llandrillo in Merionethshire. Trillo's brother Tygai founded a church near Penrhyn, Bangor; their sister Llechid founded a church in the uplands above Penrhyn.

Llandrillo yn Rhos Church [2] was built on the site of Ednyfed Fychan's private chapel and incorporates what was his tombstone, the history of this church goes back to the 13th century, but having been rebuilt over the centuries, the oldest parts of the present church are 15th century. A major restoration was carried out in 1857 and was criticised by some for amounting to 'vandalism', in particular the destruction of an ancient stained-glass window.[4] Nevertheless, it remains one of the most important historic buildings in North Wales.

The stone lych-gate was built in 1677 and is one of the oldest in the district, the sundial is from the early 18th century.[5]

The graveyard here contains the grave of Harold Lowe, an officer on the RMS Titanic. He was widely regarded as a hero, helping many to safety with cool nerve and bravery.[6] It also contains war graves of eight service personnel, two of World War I and six of World War II.[7]

In 1186 Llywelyn the Great permitted the establishment of the Cistercian Aberconwy Abbey, and the monks built a fishing weir on the sea shore below Bryn Euryn. The place became known as Rhos Fynach, heath of the monks. In a charter of 1230, Llywelyn sanctioned the purchase by Ednyfed Fychan of land at Rhos Fynach and in 1289, the abbey moved to Maenan (becoming Maenan Abbey), and the weir was ceded to Ednyfed's estate.[8] Eventually Rhos Fynach and the weir came into the hands of Robert Dudley, Earl of Leicester, who in 1575 granted it to a Captain Morgan ap John ap David, a privateer, for services rendered against the enemies of Queen Elizabeth I at sea.[9] (This is not the famous pirate of the Caribbean Captain Henry Morgan who lived in the century following).[2]

The weir continued to provide a prosperous livelihood through to the early 20th century: during a single night in 1850, 35,000 herring were caught, and 10 tons of mackerel were removed in one tide as late as 1907.[10] Because such weirs decimated inshore fish stocks, Parliament banned them in 1861 unless it could be shown they pre-dated the Magna Carta, which the then owners, the Parry Evans family, were able to prove.[2] Their estate included Rhos Fynach house, also known as Rhos Farm, on the Promenade near St Trillo's Chapel. The house is now a pub and restaurant. Its date of construction is not known for sure, but it is considered to have been started by the Cistercians before the Dissolution of the Monasteries.[9]

The fishing weir fell into disuse during World War I and most traces have disappeared.[2] Trial excavation of the site in 1993 recorded constructions carbon-dated between 1500 and 1660.[11]

Madog and claims for the discovery of America

Perhaps Rhos-on-Sea's greatest claim to fame is that, according to legend, Madog ap Owain Gwynedd, a prince of Gwynedd, sailed from here in 1170 and discovered America, over three hundred years before Christopher Columbus's famous voyage in 1492.[12] This event is recorded by a plaque on one of the properties on the sea-front. This property is called "Odstone" at no. 179, Marine Drive which unfortunately as of June 2012 has become neglected.