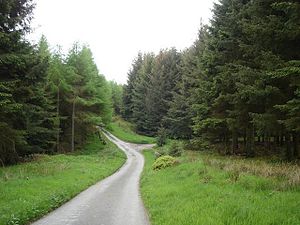 Lane in the Clocaenog Forest

The Clocaenog Forest is in Denbighshire on the Denbigh Moors. It takes its name from the village of Clocaenog, near Ruthin.

The forest is 40 square miles in extent, mostly coniferous softwoods under the control of the Forestry Commission. It was planted in 1905 on what was mostly moorland and many hill farms. This is a highland region, mostly above 1,150 feet. It experienced a severe winter in 1946/47 with over 59 inches of lying snow on flat ground recorded at Clawdd-newydd (a nearby village), and there was another hard winter in 1962/63. It is also one of the last mainland strongholds of red squirrels in Wales.

There are high points which rise above the tree level, affording views of Snowdonia and Arenig Fawr to the west, the Berwyn Range to the south, the Clwydian Hills to the east, and the Denbigh moors to the north. The highest point in the forest is 'The Mast' at Craig Bron Bannog at 1,644 feet.

Wildlife includes many birds, including the crossbill which are adapted well to the conifers. Nesting platforms have been built at the top of bare trees. There is also an enclosed area where wild horses (Przewalski's Horses) can be viewed. In addition, there are several examples of ancient remains, including at least one stone circle and the 'credstone'.

Streams run through the forest, including the source of the River Clwyd; Llyn Brenig lies on the western flank, and there is a spectacular waterfall.

A recent development in the forest is the construction in 2005 of a wind farm with 25 wind turbines. The 3 groups of turbines, north to south are:- Tir Mostyn (8), Foel Goch (7) and Marial Gwyn (10). Many more wind turbines are planned.