Sunbury-on-Thames, also known as Sunbury, is a town in Middlesex. It is considered to be part of the part of the London commuter belt. It is lies along the Thames, comfortably 16 miles away from central London, and bordered by Feltham and Hampton. Rev Gilbert White described Sunbury as "One of those pleasant villages lying on the Thames, near Hampton Court[1], a sound judgment to this day, if allowance is made for the village's rapid expansion with suburbs.

Sunbury is split into two areas, parted by the M3 motorway. Lower Sunbury, colloquially known as Sunbury Village, borders the river Thames and makes up the southern portion of the town. This area is largely residential suburban and includes the majority of Sunbury's schools and open parkland. The northern section is Sunbury Common and houses many of Sunbury's businesses. The M3 and the large roundabout Sunbury Cross divides to the two sections and has a small shopping arcade.

Marking the western border of Sunbury is the Queen Mary Reservoir which was constructed in 1925. This is also home to a sailing club and is regularly used by local schools and youth organisations to teach water sports skills. Lower Sunbury has become increasingly popular with young first time buyers looking to start families. The mixture of Victorian terraces and 1930s semi detached houses in the leafy village offers a favourable and more affordable alternative to London. A conservation area within Sunbury village has been recognised to cover Thames Street and this reflects its historic buildings, numerous pubs, restaurants and a beautiful stretch of Thames river bank leading up to the Church.

Sunbury is a largely suburban town with a number of high-rise office buildings and industrial estates clustered around the M3 motorway and the A308 (Staines Road West) and A316 (Country Way) trunk roads. Sunbury was previously the home of BP's Engineering and Research Centre, located to the north of Sunbury on the site of Meadhurst House, formerly owned by the Cadbury family. The site is now BP's international centre for business and technology and is home to a large number of BP's business units.

The town has been the home to London Irish Rugby Club since 1932 although since 2001 its premiership team has played at the Madejski Stadium in Reading. However hundreds of minis, youngsters and adults turn out for the club each weekend in Sunbury during the rugby season. A few hundred yards east of Sunbury Cross is Kempton Park Racecourse.

Sunbury Court, in Lower Sunbury, is the home of the High Council of the Salvation Army. 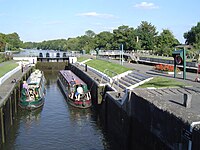 Lower Sunbury is the home of the Sunbury Millennium Embroidery. [1] The embroidery was conceived and designed in the 1990s and completed in 2000. Since July 2006 its permanent home is the purpose built Sunbury Millennium Embroidery Gallery, within the well-tended Walled Garden adjoining Sunbury Park. With the opening of a café within the gallery building, which architecturally resembles a boat, this has rapidly become a popular spot for locals and tourists alike, just across the road from a picturesque stretch of the Thames. The Walled Garden also hosts annual concerts and plays in the summer months.

In July of each year, Lower Sunbury is the start of the colourful traditional ceremony of Swan Upping, where two livery companies carry out marking of the swans on the upper reaches of the River Thames. In August, the traditional Sunbury Amateur Regatta takes place on the stretch of the river around Rivermead Island.

The town is also home to the Millennium Embroidery, a large commissioned artwork that commemorates Sunbury's ascension to the new millennium. It was designed by John Stamp and David Brown to be a large patchwork of Sunbury landmarks, including St Mary's Church, The Admiral Hawke and the river. The finished piece is actually composed of several embroideries, the largest of which measures 9 feet by 3 feet. It took four years to complete and enlisted the help of over 140 volunteers and artists.

Queen Elizabeth II visited the Embroidery in 2001, and a dedicated gallery for it was built in 2006. 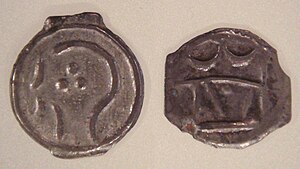 Coin from the Sunbury hoard

The earliest evidence of occupation in Sunbury is provided by the discovery of Bronze Age funerary urns dating from the 10th century BC. It is mentioned in the Sunbury Charter in AD 962.

Sunbury is listed in the Domesday Book of 1086 as Suneberie. Its assets were: 7 hides. It had 5 ploughs, meadow for 6 ploughs, cattle pasture. It rendered 6 pounds.[2]

The arrival of Huguenot refugees in the 17th century gave their name to French Street.

The riverside St Mary's Church and the Ferry House nearby are mentioned in the book Oliver Twist by Charles Dickens. Other literary references include the difficulty of rowing up Sunbury backwater in "Three Men in a Boat" by Jerome K Jerome, and Sunbury Cross under a pall of smoke during "The War of the Worlds" by H G Wells.

Sunbury was once the residence of the famous Admiral Hawke who blockaded Rochefort in 1757 and who in 1758 directed the blockade of Brest for six months.

In 1889 a group of music hall stars met in the Magpie hotel in Lower Sunbury to form the Grand Order of Water Rats. The pub itself was named after the horse that one of the entertainers owned, whilst the Grand Order was named because the Magpie (a trotting pony) had been described as a drowned water rat.

The Three Fishes in Green Street is one of the oldest pubs in Surrey, thought to date back to the 16th Century.