West Drayton is a town close to the western border of Middlesex.

West Drayton is generally south of the line formed by the Great Western Main Line and the Grand Union Canal, both of which run east-west, with Yiewsley to the north. It is situated just north of junction 4 of the M4 motorway (Heathrow Airport spur), which intersects with the A408 (for Stockley Business Park), north for Uxbridge, and it terminates south at Heathrow Airport itself. The nearby A3044 goes through Harmondsworth to the south.

West Drayton also incorporates a conservation area, The Green. Around The Green are a number of listed buildings, both residential and commercial.

In 939 the area was known as Draegtun, meaning 'farmstead at or near a portage or slope used for dragging Down loads', or 'farmstead where drays or sledges are used'. It is recorded as Draitone in the 1086 Domesday Book, and as Westdrayton in 1465.[1]

In the 1086 Domesday Book, West Drayton was assessed at ten hides with land suitable for six ploughs.[2]

The former RAF West Drayton was host to a military air traffic control (ATC) centre co-located with the civil London Area and Terminal Control Centre (LATCC), but these functions have been relocated to Swanwick), with the last ATC functions ending in January 2008.

The site was redeveloped for housing. 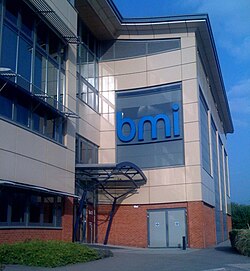 Historically, employment was commonly connected to the railway and the canal. In the modern day, West Drayton tends to be more of a commuter town, owing to its proximity to the M25, M4, M40 and M3 motorways, Heathrow Airport and Stockley Business Park.

The district has many canal paths and trails suitable for cycling.