Chiswick is a quiet Middlesex town which lies largely within a loop of the River Thames. It has long since been engulfed in the suburban conurbation but retains its individual charm and character. Chiswick High Road is the main shopping street. The High Road forms part of the original main route from London to Bath. Chiswick House and its ground lie south of the High Road and much of the suburban streetscape is built around and south of Chiswick house, down into the embrace of the river's curved meander.

The name of Chiswick is barely changed from its Old English name, Cesewic, but the town has developed somewhat since those days.

In former days, Chiswick had an agrarian and fishing economy and served also as a popular country retreat from London, with which it has good communications by road and river.

London expanded rapidly in the late 19th and early 20th centuries, the new suburbs reaching far out from the original town and Chiswick along with its neighbouring towns and villages grew. It was in due course swallowed within the conurbation. 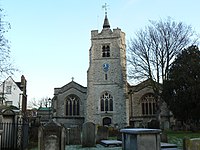 Chiswick has grown together from three complementary elements; the High Road, which is the old main road from London and the centre for shops, the riverside where once boatmen and fishermen lived and where now are found the more well-heeled, and the space between, where the nineteenth and twentieth century suburbs have grown over and around the grounds of Chiswick House.

By the riverside runs Chiswick Mall, a road lined with elegant and expensive houses and offices overlooking the Thames. Many houses have riverside gardens across the road. In the river here is Chiswick Eyot.

Chiswick can be remarkably green. The suburban roads are tree-lined and a good deal of open space remains in Chiswick:

The name "Chiswick" is of Old English origin meaning "Cheese Farm" and originates from the riverside meadows and farms that are thought to have supported an annual cheese fair on Dukes Meadows up until the 18th century. Chiswick was first recorded around 1000 as Ceswican.[1]

St Nicholas church has a 15th-century tower, although the remainder of the church was rebuilt by JL Pearson in 1882–4. Monuments in the churchyard mark the burial sites of the 18th century English artist William Hogarth—whose house is now a museum known as Hogarth's House—and William Kent, the architect and landscape designer; the churchyard also houses a mausoleum (for Philip James de Loutherbourg) designed by John Soane. One of Oliver Cromwell's daughters, Mary, lived and died in Chiswick and is buried in the churchyard. Enduring legend has it that the body of Oliver Cromwell was also interred with her. On a later note, Private Frederick Hitch VC, hero of Rorke's Drift, is also buried there.

In the east Goldhawk Road and British Grove form a border with Hammersmith. The streets much to the north of Chiswick High Road are not considered to belong to Chiswick but run into the suburbs of Bedford Park and South Acton. To the west are Gunnersbury and Brentford. Over the river lie the Surrey towns of Kew, North Sheen, Mortlake and Barnes.

Chiswick High Road contains a mix of retail, restaurants, food outlets and expanding office and hotel space. The wide streets encourage cafes and restaurants to provide pavement seating. Being situated between the offices at the Golden Mile of the Great West Road and Hammersmith, office developments and warehouse conversions to offices began from the 1960s. The first, in 1961 was 414 Chiswick High Road, which was built on the site of the old Empire Cinema, then in 1964 to 1966 the 18 storey headquarters for IBM were built above Gunnersbury tube station.

Chiswick House was designed by the Third Earl of Burlington, and built for him, in 1726–9 as an extension to an earlier Jacobean house (demolished in 1788); it is considered to be among the finest surviving examples of Palladian architecture in Britain, with superb collections of paintings and furniture.

The house's surrounding grounds, Chiswick House Gardens, are one of the most important historical gardens in England and Wales, and mark a significant step on the road to the picturesque aesthetic in garden design. The pattern of landscaping here influenced landscape gardening across Britain and elsewhere. Bisecting the garden is a man-made river, allowing an additional element of landscaping, and which an innovation in its time copied elsewhere.

Strand on the Green is a village close along the Thames at the western edge of Chiswick, subsumed into the conurbation but distinctive in its riverside paths. The more familiar use of the name is for the lane and riverside path running from Kew Bridge, edging the Thames here and looking out toward Oliver’s Island and Kew on the Surrey bank.

Chiswick grew up as a fishing village around St. Nicholas church on Church Street. The parish also included Strand-on-the-Green, Little Sutton and Turnham Green. By the early nineteenth century the fishing industry in and around Chiswick was declining as the growth of industry and sewage were causing pollution in the river. Fish began to die out and the river became unsuitable as a spawning ground. Locks upstream also made the river impassable by migratory fish such as salmon and shad.

From the 18th century onwards the High Road became built up with inns and large houses. Today the High Road is a busy shopping street with many cafés, restaurants and several 19th century public houses.

In 1864, John Isaac Thornycroft, founder of the John I Thornycroft & Company shipbuilding company, established a shipbuilding yard at Church Wharf at the west end of Chiswick Mall.[2][3] The works closed in 1908.

In 1822, the Royal Horticultural Society leased 33 acres of land in the area between the now Sutton Court Road and Duke’s Avenue.[4] This site was used for its fruit tree collection and its first school of horticulture, and housed its first flower shows. The area was reduced to 10 acres in the 1870s, and the lease was terminated when the Society’s garden at Wisley, Surrey, was set up in 1904. Some of the original pear trees still grow in the gardens of houses built on the site. 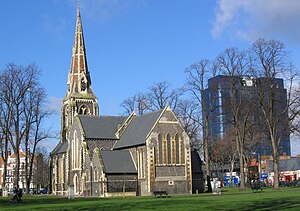 Chiswick had two well-known theatres in the 20th century.[5] The Chiswick Empire (1912 to 1959) was at 414 Chiswick High Road. It had 2,140 seats,[6] and staged music hall entertainment, plays, revue, opera, ballet and an annual Christmas pantomime. The ‘’Q Theatre’’ (1924 to 1959) was a small theatre opposite Kew Bridge station. It staged the first works of Terence Rattigan and William Douglas-Home and many of its plays went on to the West End. Today, the Tabard Theatre (1985 to date) on Bath Road, is known for new writing and experimental work.[7]

Dukes Meadows stands on land formerly owned by the Duke of Devonshire. In the 1920s, it was bought by the local council, who developed it as a recreational centre. A promenade and bandstand were built, and the meadows are still used for sport with a rugby club, football pitches, hockey club, several rowing clubs and a golf club. In recent years a local conservation charity, the Dukes Meadows Trust[8] has undertaken extensive restoration work, which saw a long term project of a children's water play area opened in August 2006.

Chiswick is the birthplace of the modern domestic violence refuge movement, with the first shelter established by Erin Pizzey in 1971.

During the Second World War, Chiswick suffered from some 50 bombing raids in late 1940 to early 1941, and another 5 in 1944.[9] Both incendiary and high explosive bombs were used, and there was also damage from falling anti-aircraft shells had not exploded as intended. From June 1944, some 14 V-1 flying bombs hit Chiswick. Chiswick was also where the first V-2 Rocket fell in September 1944, killing three people and causing extensive damage to surrounding trees and buildings. A memorial stands where the rocket fell on Staveley Road. Another War Memorial stands at the east end of Turnham Green.

The population of Chiswick grew almost tenfold during the 19th century, and the built environment is a mixture of Georgian, Victorian and Edwardian.

St. Michael on Elmwood Road, of 1908-9, was designed by W.D. Caroe. Chiswick is also home to a Russian Orthodox Cathedral, built in 1998. (See photo at Gunnersbury.) Less visually prominent than these because of its position amid other building is the Sanderson Factory, now known as Voysey House and situated in Barley Mow Passage, designed by the architect C.F. Voysey and completed in 1902. Its original purpose was a wallpaper printing works, but it is now used as office space. It is a Grade II* listed building.

Suburban building began in Gunnersbury in the 1860s and in Bedford Park, on the borders of Chiswick and Acton, in 1875: the latter, designed largely by Richard Norman Shaw, was described by Nikolaus Pevsner as the first place "where the relaxed, informal mood of a market town or village was adopted for a complete speculatively built suburb". Other suburbs of Chiswick include Grove Park (south of the A4, close to Chiswick Station) and Strand-on-the-Green, a fishing hamlet until the late 18th century.[10]

There are several historic public houses in Chiswick. Three are in Strand-on-the-Green, fronting on to the river path. The Tabard on Bath Road near Turnham Green station is known for its William Morris interior. A large part of Chiswick falls within conservation areas. 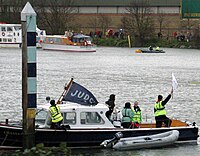 The Chiswick reach of the Thames is heavily used for competitive and recreational rowing, and Chiswick itself is home to several clubs. The University of London Boat Club is based in its boathouse off Hartington Road (the boathouse also houses the clubs of many of the University's constituent colleges and teaching hospitals). ULBC is, periodically, one of the most successful university clubs in the United Kingdom, with multiple wins at Henley Royal Regatta. Recent members include Tim Foster, Gold medallist at the Sydney Olympics and Frances Houghton, World Champion in 2005, 2006 and 2007. Mortlake Anglian & Alpha Rowing Club and Quintin Boat Club are situated between Chiswick Quay Marina and Chiswick Bridge. The foreshore facing these clubs is also used as the landing place for Boat Race crews. Tideway Scullers School is immediately downriver of Chiswick Bridge.

The Boat Race is contested on the Championship Course on a flood tide (in other words from Putney to Mortlake) with Duke's Meadows a popular view-point for the closing stages of the race. Other important races such as the Head of the River Race race the reverse course, on an ebb tide.