Paddington is an urban village of Middlesex deep within the metropolitan conurbation to the north-west of Marylebone and Westminster.

There are three important landmarks of Paddington: Paddington Station, designed by the celebrated engineer Isambard Kingdom Brunel and opened in 1847; St Mary's Hospital; and Paddington Green Police Station (the most important high-security police station in the United Kingdom).

A major project called Paddington Waterside aims to regenerate former railway and canal land between 1998 and 2018, and the area is seeing many new developments.

Derivation of the name is uncertain. Speculative explanations include Pad-ing-tun (pack-horse meadow village),[1] and Pæding-tun (village of the clan of Pæd)[2]:pp.110–111 the last being the cited suggestion of the Victorian Anglo-Saxon scholar John Mitchell Kemble.

There is another Paddington in Surrey, recorded in the Domesday Book as "Padendene"[3] and possibly associated with the same ancient family.[4][5]

A lord named Padda is named in the Domesday Book, associated with Brampton, Suffolk,[6] and while he has no known connection with this locality, it shows that such a name was known and so another lord of the same name could easily have produced Paddingatun ('Padda's people's village').

The earliest extant references to Padington appear in documentation of purported 10th-century land grants to the monks of Westminster by King Edgar as confirmed by Archbishop Dunstan. However, the documents' provenance is much later and likely to have been forged after the 1066 Norman Conquest. There is no mention of the place (nor of Westbourne nor Knightsbridge) in the Domesday Book of 1086.[7]

It has been reasonably speculated that a Saxon settlement was located around the intersection of the northern and western Roman roads, corresponding with the Edgware Road (Watling Street) and the Harrow and Uxbridge Roads.[8] A more reliable 12th-century document cited by the cleric Isaac Maddox (1697–1759) establishes that part of the land was held by brothers "Richard and William de Padinton".[9]

In the later Elizabethan and early Stuart era, the rectory, manor and associated estate houses were occupied by the Small (or Smale) family. Nicholas Small was a clothworker who was sufficiently well connected to have Holbein paint a portrait of his wife, Jane Small. Nicholas died in 1565 and his wife married again, to Nicholas Parkinson of Paddington who became master of the Clothworker's company. Jane Small continued to live in Paddington after her second husband's death, and her manor house was big enough to have been let to Sir John Popham, the attorney general, in the 1580s. They let the building that became in this time Blowers Inn.[10]

As the regional population grew in the 17th century and new innovations in administration were introduced, Paddington found itself governed as part of the Holborn Division of the Ossulstone Hundred. By 1773, a contemporary historian wrote that:

London may now be said to include two cities, one borough and forty six antient [ancient] villages [among which]... Paddington and [adjoining] Marybone (Marylebone)."[11]

Roman roads formed the parish's north-eastern and southern boundaries from Marble Arch: Watling Street (later Edgware Road) and; (the) Uxbridge road, known by the 1860s in this neighbourhood as Bayswater Road. They were toll roads in much of the 18th century, before and after the dismantling of the permanent Tyburn gallows "tree" at their junction in 1759 a junction now known as Marble Arch. By 1801, the area saw the start-point of an improved Harrow Road and an arm of the Grand Junction Canal (now the Grand Union Canal), named the Paddington Arm: all these remain.[12]:p.174

In the 19th century the part of the parish most sandwiched between Edgware Road and Westbourne Terrace, Gloucester Terrace and Craven Hill, bounded to the south by Bayswater Road, was known as Tyburnia. The district formed the centrepiece of an 1824 masterplan by Samuel Pepys Cockerell to redevelop the Tyburn Estate (historic lands of the Bishop of London) into a residential area to rival Belgravia.[13]

The area was laid out in the mid-1800s when grand squares and cream-stuccoed terraces started to fill the acres between Paddington station and Hyde Park; however, the plans were never realised in full. Despite this, Thackeray described the residential district of Tyburnia as "the elegant, the prosperous, the polite Tyburnia, the most respectable district of the habitable globe." [14]

The concept of "Tyburnia" never caught on though, perhaps as the name was too closely associated with the gallows.

An 18th-century dictionary gives the definition "Paddington Fair Day. An execution day, Tyburn being in the parish or neighbourhood of Paddington. To dance the Paddington frisk ; to be hanged."[15] Public executions were abolished in England in 1868.[16]

At the time that William Pitt the Younger retired as Prime Minister in 1801, Paddington was still a little village, and a belittling phrase was spread about his successor Lord Addington, that "Pitt is to Addington as London is to Paddington". 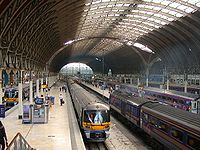 In the station are statues of its designer, Isambard Kingdom Brunel, and the children's fiction character Paddington Bear.

Commercial traffic on the Grand Junction Canal (which became the Grand Union Canal in 1929) dwindled because of railway competition in the late-19th and early-20th centuries, and freight then moved from rail to road after Second World War, leading to the abandonment of the goods yards in the early 1980s. The land lay derelict until the Paddington Waterside Partnership was established in 1998 to co-ordinate the regeneration of the area between the Westway, Praed Street and Westbourne Terrace. This includes major developments on the goods yard site (now branded PaddingtonCentral) and around the canal (Paddington Basin).

Paddington has a number of Church of England churches, including St James's, St Mary Magdalene and St Peter's.

In literature and film

Paddington in the 17th century is one of the settings in the fiction-based-on-fact novel A Spurious Brood, which tells the story of Katherine More, whose children were transported to America on board the Pilgrim Fathers' ship, the Mayflower.

Timothy Forsyte of John Galsworthy's The Forsyte Saga and other relatives resided in Bayswater Road.[17]

The films The Blue Lamp (1950) and Never Let Go (1960) depict many Paddington streets, which suffered bombing in Second World War and were subsequently demolished in the early 1960s to make way for the Westway elevated road and the Warwick Estate housing redevelopment.