Southgate is a town in northern Middlesex, close to the bounds of Hertfordshire, where the border sweeps through the urban areas. The name of the town is derived from being the south gate to Enfield Chase.

Within the area is the famous circular Southgate tube station and a variety of shops and restaurants. It also has several large green parks such as Grovelands Park which covers ninety-two arces and contains a beautiful boating-lake of seven acres adjoining dense woods and bracken. In Waterfall Road is Christ Church, a building of stone which has a tower and spire and was built in 1862 by Sir Gilbert Scott, In the grounds stands the Minchenden Oak, said to be the largest oak tree in England, and perhaps 800 years old.[1]

Southgate tube station on the Piccadilly Line is the nearest tube station to most of Southgate's residential area. The other stations are at Oakwood (to the north) or Arnos Grove (to the south west).

Christ Church stands near Southgate Green. This was built on the site of Weld Chapel, which was demolished in 1861. The clock on the church was placed there to celebrate Queen Victoria's diamond jubilee. The church is currently (Jan 2008) undergoing renovation. The Parish Church of St Andrew is on Chase Side. Emmanuel Evangelical Church meets in Ashmole School. The Methodist Church is on The Bourne, near Southgate Underground station. It was built in 1929, replacing a building on Chase Side. It is an active community hub.

There are five synagogues with Southgate in their name,: Cockfosters and North Southgate, Palmers Green and Southgate Synagogue. These two are part of the United Synagogue, also included, but independent, is the Southgate Ilan 'Bel-Air' Kahlani Synagogue, serving Yemenite Jews of Adeni extraction and other Mizrahi Jews. Chabad Southgate also is included.

Southgate was originally the South Gate of Enfield Chase, the King's hunting grounds. This is reflected in the street names Chase Road (which leads due north from the station to Oakwood, and was formerly the avenue into the Chase) and Chase Side. There is a blue plaque on a building on the site of the south gate. A little further to the south was another small mediæval settlement called South Street which had grown up around a village green; by 1829 the two settlements had merged and the village green became today's Southgate Green.[2]

Southgate was predominantly developed in the 1930s: largish semi-detached houses were built on the hilly former estates (Walker, Osidge, Monkfrith, etc.) following increased transport development. In 1933, the North Circular Road was completed through Edmonton and Southgate, and also in 1933, the London Underground Piccadilly Line was extended from Arnos Grove (where it had reached the previous year), through Southgate tube station, on to Enfield West (now known as Oakwood). This unleashed a building boom, and by 1939 the area had become almost fully developed. 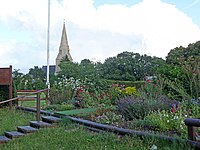 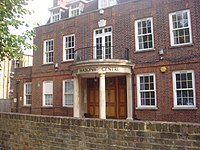 The spirit of Masonry is warm and active. The Centre is home to 160 Lodges of which 15 are from Middlesex, along with 5 Chapters. The Centre, a converted church hall, was opened in 1968. The Middlesex Lodges that joined had been meeting in pubs and similar venues and warmly welcomed the opportunity to have their own Centre.

Freemasons became concentrated in Southgate as a result of the establishment of the North Middlesex Masonic Centre, incorporated as a company in April 1963 by the effort of a number of Middlesex Masons, some of them also members of London Lodges, set up a company to provide a permanent Masonic centre in the north of the Province. The company, named the North Middlesex Masonic Centre was incorporated. The search for premises was hard, due to insufficient funds. There was still a general shortage of suitable premises, with many popular meeting places in and around Barnet closing their doors to Freemasonry, causing problems for Lodges and Chapters in Hertfordshire and London as well as Middlesex. In response to this, Grand Lodge gave a dispensation to broaden the five mile London rule, declaring a neutral territory in which Masons from London, Hertfordshire and Essex could all meet without any change of Province. This ruling created a great surge of interest, promising more capital in the future and the search became more vigorous. On 24 July the Chairman of the company signed a contract to purchase the premises at High Street, Southgate, but the story did not end there and a private loan had to be arranged before the title was finally filed on 7 March 1968. A resolution was passed changing the company name to Southgate Masonic Centre Limited to express fully its capacity of operating in neutral territory. 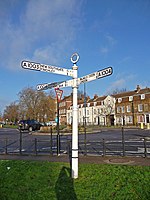