Shoreditch is town in Middlesex deep within the metropolitan conurbation, a little north of the City of London. Shoreditch is entirely contiguous with its surrounding towns.

The town is built around its High Street and church. Another landmark is Shoreditch Town Hall which stands almost opposite the church on Old Street, a monument to civic pride and permanence built by the Metropolitan Borough of Shoreditch created in 1899 and gone by 1965. The Hall has been restored and is now run by the Shoreditch Town Hall Trust. 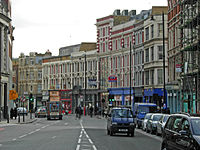 Shoreditch has, since around 1996, become a popular and fashionable part of London. The area has been subject to considerable gentrification in the past twenty years, with accompanying rises in property prices.

Recently, during the second 'dot-com' boom, the area has become popular with London-based web technology companies who base their head offices around Old Street, who tend to gravitate towards Old Street roundabout, popularising the term 'Silicon Roundabout' to describe the area, referred to by the Prime Minister, David Cameron, in a speech in November 2010.[2] 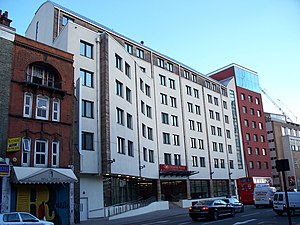 Formerly a predominantly working class area, Shoreditch and Hoxton have, in recent years, been gentrified by the creative industries and those who work in them. Former industrial buildings have been converted to offices and flats, while Curtain Road and Old Street are notable for their clubs and pubs which offer a variety of venues to rival those of the West End. Art galleries, bars, restaurants, media businesses and the building of the Hackney Community College campus are further features of this transformation. However, to the north, east and south, poor quality housing and urban decay is still prevalent. Other traditions of working class entertainment survive on Shoreditch High Street where the music halls of yesteryear have been replaced by the greatest concentration of striptease venues in London.[3] On Commercial Street to the South, prostitution was still rife in 2001,[4] but since the development of Shoreditch High Street railway station and other amenities, this has declined markedly. 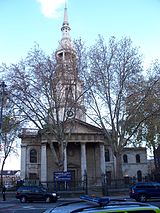 The original parish church of Shoreditch is St Leonard's, standing in the heart of the town at the crossroads of the High Street and Hackney Road. Its steeple stands 192 feet tall and it has a giant four-columned, pedimented Tuscan portico. Inside the church the entablature is supported by giant Doric columns too.

The earliest surviving reference to the church is from the twelfth century, though an Anglo-Saxon church may have stood on the same site. The mediaeval church presided over Shoreditch for centuries. Several leading lights of the Elizabethan stage are buried here from Shoreditch's time at the heart of the theatrical revolution in the days of Shakespeare.

In 1716 the church tower collapsed. Between 1763 and 1740, St Leonards was thoroughly rebuilt in fashionable Palladian style by George Dance the Elder. He gave it the soaring steeple in imitation of Christopher Wren's magnificent steeple on St Mary-le-Bow in Cheapside, and the Tuscan portico reflects the Palladian style as realised in its native Italy. Dance was also the architect of the Mansion House. Many original 18th century fixtures and fittings remain, including the font, the pulpit, the communion table, clock, organ case, bread cupboards and commandment boards. It was lit with gaslight in 1817, the first in London.

The church maintains more of Shoreditch's heritage: the parish stocks and whipping post stand in the porch of the church and in the churchyard is the Shoreditch parish pump.

St Leonard's is one of the churches around London which joins in the variety of sounds in the nursery rhyme Oranges and Lemons; "'when I grow rich' say the bells of Shoreditch".

The name of the town

The etymology of 'Shoreditch' is uncertain. The local legend, of early tradition, tells that Jane Shore, the mistress of King Edward IV, died in the ditch here. However, as the place is attested as 'Soersditch', long before this, a more plausible suggestion is 'Sewer Ditch', in reference to an ancient drain or watercourse in what was a boggy area adjacent to the fen which gave a name to Finsbury to the west.[5] Possibly it refers to the headwaters of the River Walbrook, which rose in the Curtain Road area.

The legendary associations of Jane Shore with the area are commemorated by a very large painting of Jane being retrieved from the ditch, hung at Haggerston Branch Library and by a design on glazed tiles in a shop in Shoreditch High Street, showing Edward IV meeting her at the goldsmith's establishment her husband kept. This shop was formerly 'The Jane Shore' tavern.[6]

Shoreditch was long an extramural suburb of the City of London, centred around St Leonard's Church at the crossroads where Shoreditch High Street and Kingsland Road are intersected by Old Street and Hackney Road.

Shoreditch High Street and Kingsland road are a small sector of the Roman Ermine Street whose route, today's A10, was the Old North Road. The road was the major coaching route to the north, leaving the City walls at Bishopsgate]. The east-west course of Old Street-Hackney Road was also probably originally a Roman Road, connecting Calleva Atrebatum with Camulodunum, bypassing Londinium to the south.[7]

Shoreditch was the site of a house of canonesses, the Augustinian "Holywell Priory" (named after a Holy Well on the site), from the 12th Century until its dissolution in 1539. This priory was located between Shoreditch High Street and Curtain Road to east and west and Batemans Row and Holywell Lane to north and south. Nothing remains of it today.[8]

In 1576, on the site of the Priory, James Burbage built the first playhouse in England, known as 'The Theatre', commemorated today by a plaque on Curtain Road, and excavated in 2008.[9] Some of William Shakespeare's plays were performed here and at the nearby Curtain Theatre, built the following year and 200 yards to the south (marked by a commemorative plaque in Hewett Street off Curtain Road). Shakespeare's Romeo and Juliet was performed at The Theatre and gained 'Curtain plaudits'. Henry V too was performed within 'this wooden O'. In 1599, Shakespeare's company moved the timbers of 'The Theatre' to Southwark, when the lease expired, and there built from them The Globe. The Curtain continued performing plays in Shoreditch until at least 1627.[10]

William Shakespeare lodged in nearby Bishopsgate; a small chapel in Hollywell Street commemorated his association with the area until it was destroyed in Second World War. A pub sign that claimed that he drank in the White Horse on Shoreditch High Street has recently been removed.

Christopher Marlowe too, one of the great dramatists of the Elzabethan age, and Shakespeare' contemporary with, lived in Norton Folgate, the southern continuation of Shoreditch High Street. His plays were performed in the Shoreditch theatres. 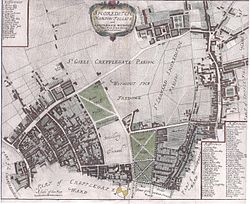 Shoreditch was attractive as a location for these early theatres because it was outside the jurisdiction of the City of London, whose corporation was controlled by puritans. Even so, they drew the wrath of contemporary moralists. Shoreditch was deplored:

"... base tenements and houses of unlawful and disorderly resort' and the 'great number of dissolute, loose, and insolent people harboured in such and the like noisome and disorderly houses, as namely poor cottages, and habitations of beggars and people without trade, stables, inns, alehouses, taverns, garden-houses converted to dwellings, ordinaries, dicing houses, bowling alleys, and brothel houses."[11]

During the 17th century, wealthy traders and Huguenot silk weavers moved to the area, establishing a textile industry centred to the south around Spitalfields. By the 19th century Shoreditch was also the locus of the furniture industry; now commemorated in the Geffrye Museum on Kingsland Road. However the area declined, along with both textile and furniture industries, and by the end of the 19th Century, Shoreditch was a byword for crime, prostitution and poverty. This situation was not improved by extensive devastation of the housing stock in the Blitz during Second World War and insensitive redevelopment in the post war period. 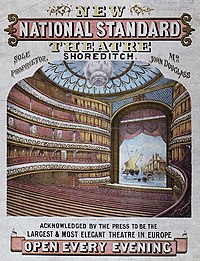 1867 Poster from the National Standard Theatre

In the nineteenth and early twentieth centuries Shoreditch was a centre of entertainment to rival the West-End and boasted many theatres and music halls: 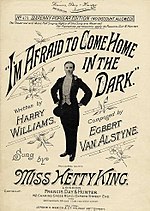 Sadly, none of these places of entertainment survives today. For a brief time, music hall was revived in Curtain Road, by the temporary home of the Brick Lane Music Hall. This too, has now moved on.

A number of playbills and posters from these music halls, survive in the collections of both the Bishopsgate Institute and the Victoria and Albert Museum.

In the mid-1960s, the main streets of Shoreditch were formed into a mile-long one-way system, which became associated with traffic congestion, poor conditions for walking and cycling, high speeds, high collision rates, and delays for bus services. The gyratory system came to be seen as "the main factor holding back the cultural regeneration of South Shoreditch"[12] and "a block to economic recovery".[13] Following a lengthy campaign,[14] the then newly formed Transport for London agreed to revert most of the streets to two-way working, a project which was completed in late 2002.

In 2005 funding was announced for the East London Line Extension to extend the existing line from Whitechapel tube station, bypassing Shoreditch tube station (which closed in June 2006) and creating a new station titled "Shoreditch High Street" at the site of the old Bishopsgate Goods Yard, demolished in 2004. 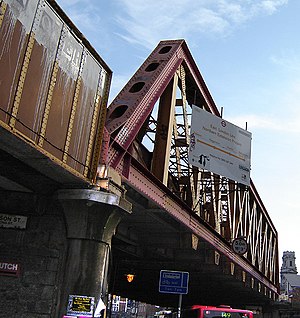 The railway bridge on Kingsland Road: part of the East London Line extension