Wembley is a town of Middlesex between Northolt and Willesden. It is home to the famous Wembley Stadium and to Wembley Arena. Wembley itself, the original town, is centred on the High Road. It has to contiguous suburbs to the north; North Wembley and Wembley Park, the latter the home of Wembley Stadium and the Arena.

The town is at the meeting of railway lines, which have contributed to its growth, and four stations bear its name; Wembley Central, Wembley Park, Wembley Stadium and North Wembley The Wembley area is identified in the Mayor of London's "London Plan" as one of 35 major centres in his area.[1]

Most of Wembley's housing consists of inter-war semi-detached houses and terraces and of modern apartment blocks, with a significant minority of detached housing.

Until the nineteenth century Wembley was in a rural setting, but suburban expansion spread to Wembley eventually, expanding the town and the villages around it, planting new suburbs, and eventually ensuring that Wembley is entirely contiguous with the engulfing conurbation. Nevertheless, Wembley has retained a number of green spaces, a memory in some measure of its rural past. These include:

Brent River Park / Tokyngton Recreation Ground (of 50 acres) has recently been restored, returning the river to a more natural course, perhaps a posthumous gift to John Betjeman, who wrote:

Gentle Brent, I used to know you
Wandering Wembley-wards at will,
Now what change your waters show you
In the meadowlands you fill![2]

Nearby Sudbury Golf Course backs onto the Grand Union Canal with its towpath running into central London. Sudbury Squash and Tennis Club has outdoor tennis courts, an indoor squash court and a clubhouse.

Wembley is a short distance away from the Welsh Harp reservoir and open space, created in the early 19th century by damming the River Brent to provide water for the Grand Union Canal.

"Wembley City" is being constructed around the junction of Engineers Way and Empire Way, near the famous Wembley Stadium, including a new Civic Centre for the local council. A new "Ark Academy" in Wembley Park is due to open by December 2010.

The name "Wembley" is derived from the Old English Wembanleah, meaning "Wemba's meadow". The name was first mentioned in the charter of 825 granted by King Beornwulf of the Mercians.

The village grew up on the hill south of the Harrow Road, surrounded by woodland. By 1547 there were only six houses in Wembley but though small it was one of the richest parts of Harrow.

A windmill stood on Wembley Hill by 1673. 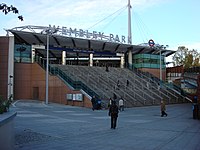 Wembley's development was spurred and accelerated by the railways.

In 1837, the London and Birmingham Railway (now part of the West Coast Main Line) was opened from Euston Station in London through Wembley, to Hemel Hempstead in Hertfordshire, and completed to Birmingham the following year. The changing names of the local station demonstrated the increasing importance of the 'Wembley' name. 'Sudbury' station opened in 1845, renamed as 'Sudbury and Wembley' in 1882, renamed 'Wembley for Sudbury' in 1910, and renamed yet again as 'Wembley Central' in 1948, at the time of the Olympic Games of that year. To modernise the service, a new line was built alongside the main lines. Bakerloo Line trains, and electric trains to Broad Street started in 1917. Electric trains to Euston Station began running in 1922: since 1917 there have been six platforms at what is now Wembley Central Station.

A new station, Wembley Park, opened in 1894, servicing the Metropolitan Railway from Baker Street, which had first cut through eastern Wembley in 1880.

In November 1905, the Great Central Railway (now, in this section, part of the Chiltern Main Line) opened a new route for fast expresses that by-passed the congested Metropolitan Railway tracks. It ran between Neasden Junction, south of Wembley, and Northolt Junction, further west, where a new joint main line with the Great Western Railway began. Local passenger services from Marylebone Station were added from March 1906, and new stations were opened, including 'Wembley Hill', next to what later became the site of Wembley Stadium.

Wembley Hill station was renamed 'Wembley Complex' in May 1978, before getting its present name, "Wembley Stadium" in May 1987.[5]

The British Empire Exhibition was held at Wembley in 1924-25, and grand new building s were erected at Wembley Park to house it, including the Empire Stadium, more commonly known as Wembley Stadium, which hosted the opening ceremony.[6][7][8] of 1924-1925.[9][10][11][12] Until the 2000s, remnants of the many reinforced concrete buildings, including the original 1923 Wembley Stadium, remained, but nearly all have now been removed, to make way for redevelopment.

The coming of the British Empire Exhibition fuelled a building boom that transformed Wembley with new suburbs and ensured its membership of the suburban belt spreading out from London.

In 1948 the Olympic Games were held at Wembley Stadium; the broad Olympic Way running from Wembley Park Station straight into the open maw of the Stadium is a memory of that event.

The rise and fall of industry

Wembley, in common with much of Middlesex, has had an extensive manufacturing industry, but much of it closed in the 1980s. Factories in the area included Glacier Metals (bearings), Wolf Power Tools, Sunbeam Electrical Appliances, Griffin & George (laboratory equipment) and GEC (whose research plant was one of the first of its type in Britain). The retail centre of Wembley (the High Road and Ealing Road) has suffered from chronic traffic congestion, and from the opening of neighbouring purpose-built shopping centres, first Brent Cross in the early 1970s, and later the shopping centres at Harrow and Ealing. During the 1960s rebuilding of Wembley Central station, a block of flats, an open-plan shopping plaza and a car park were constructed, on a concrete raft over the railway.

The shopping plaza suffered a slow decline and was therefore poorly maintained but is being redeveloped as Central Square. The first phase of including 85 homes and reconstruction of the plaza, has been completed.[13] 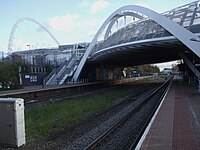