The West End of London (more commonly referred to as simply the West End) is an area of central London in Middlesex containing many of London's major tourist attractions, shops, businesses, government buildings, entertainment venues (including the commercial West End theatres). Use of the term began in the early 19th century to describe fashionable areas to the west of the City of London.[1]

The West End is the most expensive location in the world in which to rent office space, beating Tokyo in December 2013.[2]

Lying to the west of the ancient City of London, the West End was long favoured by the rich elite as a place of residence because it was usually upwind of the smoke drifting from the crowded City. It was also close to the royal seat of power at Westminster.

The West End as it is know today was developed in the 17th, 18th and 19th centuries, it was originally built as a series of palaces, expensive town houses, fashionable shops and places of entertainment. The areas closest to the City around Holborn, Seven Dials, and Covent Garden historically contained poorer communities that were cleared and redeveloped in the 19th century.

The name "West End" is a flexible term with different meanings in different contexts. It may refer to the entertainment district around Leicester Square and Covent Garden; to the shopping district centred on Oxford Street, Regent Street, and Bond Street; or broadly to the whole of that part of central London (itself an area with no generally agreed boundaries) which lies to the west of the City of London. 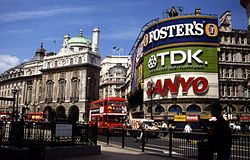 The annual London New Year's Day Parade takes place on the streets of the West End. 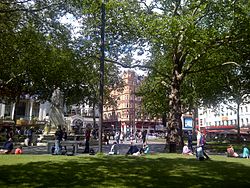 Using the broadest definition, these are the inner districts of the West End, which were all developed by about 1815:

The districts to the south, north and west of Hyde Park and Kensington Gardens were developed between the end of the Napoleonic Wars in 1815 and the late 19th century, in some cases based on existing villages. The more fashionable of them were generally regarded as being in the West End at that time: 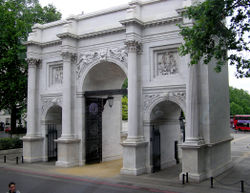 The West End is laid out with many notable public squares and circuses, the latter the first roundabouts in London. These include: