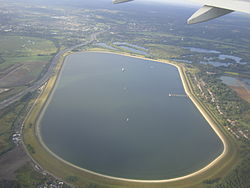 Wraysbury Reservoir is a water supply reservoir for the metropolis, just west of the M25 near the village of Wraysbury, on the border of Middlesex and Buckinghamshire. It lies directly under the western approach path of Heathrow Airport. The reservoir was begun in 1967 and completed by W. & C. French in 1970[1] with a capacity of 45 million cubic yards.[2]

Engineering design data for the Wraysbury reservoir is as follows.[3]

The reservoir is owned and operated by Thames Water; 90 million gallons of water are pumped daily from an inlet at Datchet on the River Thames. A neighbouring reservoir is the King George VI Reservoir, opened in 1947, which is supplied from Hythe End. To keep the grass short and make inspections easier, Thames Water maintains a flock of sheep on the earthen banks.[4]

It is a 508-acre biological Site of Special Scientific Interest[5][6] and part of South West London Waterbodies Ramsar site[7] and Special Protection Area.[8] It has nationally important numbers of wintering cormorants, great crested grebe and shovelers. It also supports many gadwalls.[9]