Hounslow is a town in western Middlesex within the Greater London conurbation. It is located between Isleworth to the east, Feltham to the west, Whitton to the south and Heston to the north.

The name Hounslow is spelt in old records as 'Hundeslow' and similar, pointing to Anglo-Saxon Hundes hlāw, meaning "the dog's mound" or "the mound of a man named or nicknamed Hound".

Positioned on the Bath Road (where it forks to the Staines Road at the Bell Inn), Hounslow was centred around Holy Trinity Priory founded in 1211.[1] The priory developed what had been a small village into a town with regular markets and other facilities for travellers heading to and from London. Although the priory was dissolved in 1539 the town remained an important staging post on the Bath Road. The adjacent Hounslow Heath that had been used as a military encampment by both Oliver Cromwell and James II developed a reputation as the haunt of highwaymen and footpads. Nearby important landowners included those of Osterley House, Syon House, Hanworth Park House and Worton Hall.

The building of the Great Western Railway line from London to Bristol from 1838 reduced long-distance travel along the Bath Road. By 1842 the local paper was reporting that the 'formerly flourishing village', which used to stable 2,000 horses, was suffering a 'general depreciation of property'.[2] The Hounslow Loop Line was constructed in 1850, prompting new development.

One of the earliest surviving houses in the town is The Lawn, in front of the Civic Centre with its public tennis courts, in brown brick[3] with three double-hung sash windows set back in reveals with flat arches, roof with parapet and porch of fluted doric columns, pilasters, entablature and semi-circular traceried fanlight.[4]

The construction of the Great West Road (a revival of an earlier name for the Bath Road as a by-pass for it around the north of Brentford, Isleworth and Hounslow centres) in the 1920s attracted the building of the factories and headquarters of large companies. The factories were a great local source of employment until a decline in the 1970s, attracting workers from a wide area and leading to a great deal of housing development. In the next two decades offices largely replaced factories on the Great West Road and further expansion in hotel and housing stock has taken place, an example being the Blenheim Centre.

Hounslow is an economic hub with a large shopping centre which adjoins its high street and a large number of restaurants, cafés and small businesses,[5] many of which are associated with product assembly, marketing, telecommunications and London Heathrow Airport, which has a large number of businesses and public sector jobs in and around it to which the local population commute. The settlement is also partially employed in the Commuter Belt with access between 45 and 60 minutes from most of Central London.

DHL Air UK has its head office in the Orbital Park in Hounslow.[6]

The A4 Great West Road joins with the A3006 Bath Road (from the A315) before Henlys Roundabout which is in Hounslow West from which a west-north-west route passes London Heathrow Airport, terminals 1 to 3 and terminal 5 as the Bath Road and a WSW route, the A30, passes terminal 4, bypasses Staines and reaches the M25; the remainder is a mostly-minor route to Land's End, Cornwall.

The M4 motorway is two miles north; its nearest junction, J3, being north-west along the A312.

The A315 is the historic west-south-west road out of London on which Hounslow's High Street is placed. To the east, it bisects Isleworth, Brentford and Chiswick. To the west it bisects North Feltham and Bedfont before joining the A30.

The north-south A312, The Parkway, to the west of Hounslow leads south to Hampton or north to Harrow passing Waggoners' Roundabout, Hayes, Yeading and Northolt.

Three minor roads converge on Heston from the A315 in parts of Hounslow, the A3063, A3005 and B363. The single road re-divides just north in Norwood Green into a north-west road to Southall (the A3005) and into the A4127 that passes by Hanwell, briefly using the A4020 west before bypassing Dormers Wells, passing Greenford to reach Sudbury, the town immediately to the west of Wembley and North Wembley. 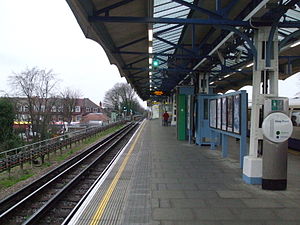 Hounslow railway station is on the railway line to London Waterloo, or westwards to Reading, Weybridge or to Windsor. The railway line also offers services on the Hounslow Loop Line, opened 1850, further around the loop to Twickenham and Richmond.[7]

Hounslow Heath and other parks

Hounslow Heath is a large public open space and local nature reserve to the west of Hounslow, a London borough. It now covers about 200 acres, the residue of the historic Hounslow Heath that covered over 4,000 acres.

The Heath has major historical importance: routes from London to the west and south-west of Britain used to pass through it. Staines Road, the northern boundary of the present Heath, was the Roman Road, Trinobantes. There are several historic references to Roman camps on or close to the Heath. Continuous recorded history dates back to Norman times. It gave its name to the former hamlet of Heathrow.

Hounslow has a very high immigration rate. According to the 2011 Census, more than 50% of Hounslow residents are born outside of the UK.

A printed programme dated 7 July 1935 suggests that there may have been motor cycle speedway racing at a venue in Dockwell Lane branded as Hounslow Speedway. The best information suggests that more than one meeting was staged in conjunction with the Hounslow Motor Cycle and Car Club. The Irish Guards GAA club are based in Houslow.