Hillingdon is a town in western Middlesex subsumed in suburbia between Uxbridge and Hayes. Northolt Airport lies to the north and the fields of Sipson and Harlington to the south, providing a welcome green gap between Hillingdon and full immersion in the swollen, encroaching metropolis

The name Hillingdon appears in the Domesday Book (1086) as Hillendone, possibly meaning "hill of a man named Hilla".[1]

Hillingdon was an ancient parish, and had within it the chapelry of Uxbridge, which latter became a separate parish as it grew.

Hillingdon’s position as a rural village changed dramatically with the growth of the suburbs within Middlesex. The railway came this way and brought commuters and new houses with it, and the Western Avenue (now the A40) likewise spurred expansion.

The A40 Western Avenue was rerouted in the early 1990s to run slightly north of its original route, thereby allowing traffic to flow without interruption at the junction of Hillingdon Circus. Hillingdon tube station was required to be demolished in order for the new road to be constructed, and a new station was opened further south along the line in 1994, winning the Underground Station of the Year award for that year.[2] 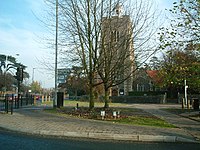 The Church of St John the Baptist

The church of St John the Baptist stands at the top of Hillingdon Hill, at its junction with Royal Lane. It was built in 1629, replacing an earlier building deemed to have become unsafe.[3] In 1846, the architect George Gilbert Scott was asked to design an extension, after the increasing population meant the church was becoming too cramped. This extension was completed between 1847 and 1848 by the Fassnidge builders from Uxbridge.[3]

Hillingdon Court was built in 1858 by Sir Charles Mills as his family home, after he had bought separate adjacent properties in Vine Lane. Both buildings were demolished and the plots combined to allow for the construction of the new property. The mansion remained in the family's ownership until the death of the Second Baron Hillingdon, Charles Mills in 1919. Part of the estate was bought by the local authority, while the mansion was bought by the Roman Catholic Order of the Sacred Heart and became a nursing home in 1920.