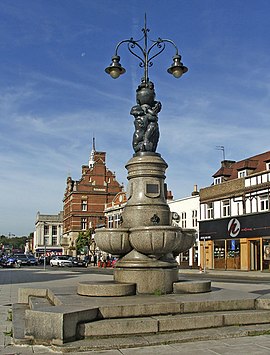 The Hundred of Edmonton in Middlesex

Edmonton is a hundred of Middlesex, in the north of the county. It is named after the town of the same name, Edmonton in its midst. As with most of Middlesex, the Hundred of Edmonton is heavily urbanised, until its northern parishes, where it breaks out of the conurbation. It had a total population of 508,816 in 2011.

The Edmonton Hundred extends from the bend in the River Lea at Tottenham northwards, and contains Middlesex's northern bulge. The hundred borders Ossulstone Hundred to the south-west (part of the division between them being the rude intrusion of Hertfordshire territory, at Totteridge; Hertfordshire to the north; and Essex across the River Lea to the east.

The main towns within the hundred are:

The hundred appears in the Domesday Book of 1086. It was sometimes known as the Half Hundred of Mimms.[1]

The Hundred Moot appears to have originally been held near what is now Potters Bar. By the seventeenth century the "mote plane" was in an open area of Enfield Chase. The court for the hundred eventually moved to a public house in Enfield, until the moot fell into disuse.[1]

During the nineteenth century the urban spread from London trespassed upon the north of the county, accelerated by the coming of the railway.

The populations of the ancient parishes in Edmonton Hundred as given at each ten-yearly census from 1801 – 1881 are recorded as:[2]