Pinner is a town and ancient parish in north-western Middlesex, close to the border with Hertfordshire.

Pinner Village was originally a hamlet, first recorded in 1231 as Pinnora,[1] although the already archaic -ora (meaning 'hill') suggests its origins lie no later than c.900.[2] The name Pinn is shared with the River Pinn, which runs through the village.

The oldest part of the village lies around the fourteenth-century parish church of St John the Baptist,[3] at the junction of the present day Grange Gardens, The High Street and Church Lane. The earliest surviving private dwelling, East End Farm Cottage, dates from the late fifteenth-century.[4]

The village expanded rapidly between 1923 and 1939 when a series of garden estates, including the architecturally significant Pinnerwood estate conservation area – encouraged by the Metropolitan Railway – grew around its historic core.[5] It was largely from this time onwards that the area (including Hatch End, which forms the northeastern part of Pinner) assumed much of its present-day suburban character. The area is now continuous with neighbouring suburban districts including Rayners Lane and Eastcote.

Pinner contains a large number of homes built in the 1930s Art Deco style, the most grand of which is the Grade-II listed Elm Park Court at the junction of West End Lane and Elm Park Road. Pinner has had an annual street fair held in May since 1336, when it was granted by Royal Charter by Edward III;[6] it remains popular today.

Pinner tube station is on the Metropolitan line in zone 5.

Pinner's old parish church is dedicated to John the Baptist. It was consecrated in 1321, but built on the site of an earlier Christian place of worship. The west tower and south porch date from the 15th century.[7]

Pinner has a rugby union team, Pinner and Grammarians RFC, a member club of the Rugby Football Union it is the most junior team to have supplied a President to the RFU. It also has a Cricket team, Pinner Cricket Club.Pinner also has a youth football club, Pinner United FC – www.pinnerunitedfc.com. In addition to numerous restaurants and a number of public houses, Pinner also has a thriving amateur theatre group, Pinner Players, who have been performing in the area since 1936 and currently stage productions at Pinner Village Hall off Chapel Lane - www.pinnerplayers.com 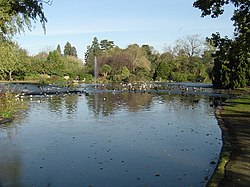 The lake at Pinner Memorial Park

Horatia Nelson, daughter of Lord Nelson and Lady Emma Hamilton, lived in Pinner from 1860 until her death in 1881;[8] distinguished pilot Brian Lane (1917–1942) grew up in the town; astronomer Sir Patrick Moore was born here in 1923;[9] Monster Raving Loony Party leader Screaming Lord Sutch, who lived in nearby South Harrow, is buried in Pinner New Cemetery.[10]

A number of literary figures have an association with Pinner. The Poet Laureate Henry James Pye retired to East End House at the end of his career in 1811,[1] the novelist Edward Bulwer-Lytton wrote Eugene Aram at Pinner Wood House in 1832,[11] and Samuel and Isabella Beeton lived on the Woodridings estate between 1856 and 1862, during which Mrs Beeton's Book of Household Management was published.[8] The novelist Ivy Compton-Burnett was born in the village in 1884,[12] and the playwright W. S. Gilbert, though he did not live in Pinner, was a magistrate there from 1893 onwards.[13] Another Victorian food writer, Agnes Marshall, whom most credit with the invention of edible ice-cream cones, had a country home there and died there in 1905. Twentieth-century figures include the cartoonist William Heath Robinson, who lived in Moss Lane between 1913 and 1918[14] (and now has a museum dedicated to him at West House in Pinner Memorial Park), and the former Children's Laureate Michael Rosen, who writes children's books such as We're Going on a Bear Hunt, lived in Pinner from the time he was born in 1946, until 1962.[15]

Figures in the world of entertainment associated with Pinner include the following: Sir Elton John, who was educated at Pinner Wood Junior School, Reddiford School and Pinner County Grammar School, until age 17, when he left just prior to his A Level examinations to pursue a career in the music industry;[16] composer Leslie Bricusse, best known for his partnership with Anthony Newley, was born in Pinner; songwriter Tony Hatch, composer of the Petula Clark hit "Downtown" and the Neighbours theme, was born here; Bruce Welch, guitarist in The Shadows, lived in Pinner while courting Olivia Newton-John; singer Charlie Dore was born here; and Simon LeBon, vocalist of '80s pop-group Duran Duran, grew up locally and attended the Pinner County Grammar School.[17]

Actor David Suchet and comedian Ronnie Barker were both one-time owners of 17th-century Elmdene in Church Lane;[18] actress Jane March grew up here before moving to the United States;[19] actress Molly Weir, best remembered for her role as the long-running character Hazel the McWitch in the BBC TV series Rentaghost, lived in Pinner until her death in 2004;.[20] Comedy writer and TV funny man Barry Cryer lives here,[21] as did broadcaster Bob Holness, the former host of quiz show Blockbusters.[22]

On 11 September 2013 Pinner resident Daniel Finkelstein was made a life peer as Baron Finkelstein of Pinner in the County of Middlesex.[25]

It is also the home of BBC Radio 1 personality, Chris Stark, who references many moments in Pinner in the now World Famous: 24 Years at the Tap End, a series on the Radio One Scott Mills show, in which Stark recites his autobiography, named after him finding out he has been sitting at the uncomfortable (and, some would say, wrong) end of the bath. Fearne Cotton of BBC Radio 1 is also from Pinner.

Pinner features notably in John Betjeman's 1973 film Metro-Land, where it centres on the village fair in the High Street.[26] The BBC sitcom May to December was set in Pinner, and its exterior shots were videotaped in the High Street.[27] During the 1990s the children's TV series of Aquila was filmed in and around Pinner, particularly at the local Cannon Lane School. Chucklevision, the Children's TV series based on the Chuckle Brothers also filmed in Pinner. The film Nowhere Boy had a number of scenes filmed in Pinner, including outside the Queens Head Pub, Pinner High street,[28] and on Woodhall Gate, which stood in for John Lennon's childhood home. Pinner has also been the setting for the BBC sitcom My Hero and the Channel 4 sitcom The Inbetweeners. Filming for the movie The Theory of Everything took place outside the St John the Baptist Church on Pinner High Street.[29]