Clerkenwell in Middlesex stands just to the north of the City of London, bounded on the south by Smithfield. The Smithfield market until Victorian days not the covered market known today but a large field, soon surrounded by houses, serving as a cattle market, between Clerkenwell and the City. The village was named from the Clerks' Well, which was rediscovered in 1924.

Clerkenwell was the home of Middlesex government for centuries, but also a home for dissenters. Clerkenwell lies just north of the City of London and so was a natural home for those who could not afford to live in the City and those who wished to avoid the strictness of the City's government.

This is an old Middlesex village long since absorbed into the swelling of London but always a place apart from the city, a place for those the city could not accommodate. Its reputation for independence is still reflected in the number of media and arts businesses which are established here.

The south-western part of Clerkenwell was once known as London's "Little Italy" because of the large number of Italians living in the area from the 1850s until the 1960s.

The justices' records report that until King James's time the justices of Middlesex met at inns in Clerkenwell. Immediately before the first county hall was opened, they were meeting at the Castle near Smithfield Bars, a site not identified.

In 1610 King James I gave the justices of Middlesex a plot on which to build a new sessions house. The house itself was built from funds donated by Sir Baptist Hicks, a wealthy mercer in the City and a justice of Middlesex. When the justices moved in, they resolved that in gratitude their new all should be named "Hicks-hall".

Hicks Hall stood in the middle of St John Street, Clerkenwell, just north of Smithfield. It served for more than 160 years as the centre of justice and administration in Middlesex.

By the 1770s Hicks Hall's condition had begun to deteriorate and it was judged too small. Hicks Hall was closed in 1778, and demolished. All that remains of Hicks Hall is a fireplace surround, taken to its successor sessions house in 1780, and in turn to the Inner London Sessions House in Newington Causeway, Surrey in 1921.

The next sessions house was built in 1780 on Clerkenwell Green, where it still stands. It was also referred to as "Hicks Hall" at first as a mark of continuity, but became known simply as the Middlesex Sessions House. On the division of Middlesex government in 1889, the Sessions House fell to the new "London County Council" who occupied it until 1928.

Clerkenwell itself was govered as the parish of Clerkenwell St James until 1900 when the parish administration was abolished. Clerkenwell Town Hall had been built on Rosebery Avenue only five years before abolition and became Finsbury Town Hall serving the new borough, until its abolition in turn in 1965.

Clerkenwell Green lies at the centre of the old village. It has a delightful village atmosphere, a wedge-shaped open space flanked with houses, shops and offices. There is no green as such; just a few London Plane trees. The old Middlesex Sessions House stands here, and the village church.

In conveying some impression of its history, Clerkenwell Green gives the appearance of one of the better-preserved village centres in what is now central London. In Charles Dickens's Oliver Twist, Clerkenwell Green is where Fagin and the Artful Dodger induct Oliver into pickpocketing amongst shoppers in the busy market once held there. Indeed, Dickens knew the area well and was a customer of the Finsbury Savings Bank on Sekforde Street, a street linking Clerkenwell Green to St John Street.

Clerkenwell Green has historically been associated with radicalism. Lollards settled and worshipped here in the 16th century, away from the reach of the authorities of the City, and remained until the Reformation turned the Lollards from persecuted dissenters into the soul of the establishment.

The Chartists gathered here in the 19th century and communists in the early 20th century.[1] In 1902, Vladimir Ilyich Ulyanov (Lenin) moved the publication of the Iskra (Spark) to the British Social Democratic Federation at 37a Clerkenwell Green, and issues 22 to 38 were indeed edited there. At that time Lenin resided on Percy Circus, less than half a mile north of Clerkenwell Green. In 1903 the newspaper was moved to Geneva. It is said that Lenin and a young Ioseb Besarionis Dze Jugashvili (Stalin) met in the Crown and Anchor pub (now known as The Crown Tavern) on the Green when the latter was visiting London in 1903. In the 1920s and 1930s, 37a Clerkenwell Green was a venue for Communist Party meetings, and the Marx Memorial Library was founded on the same site in 1933. Clerkenwell's tradition of left-leaning publication continued until late 2008 with The Guardian and The Observer having their headquarters on Farringdon Road, a short walk from the Green. Their new offices are a short distance away in King's Cross.

The Clerks' Well from which Clerkenwell is named, was in Farringdon Lane (clerken was the Middle English genitive plural of clerk. In the Middle Ages, the London Parish clerks performed annual mystery plays there, based on biblical themes. Part of the well remains visible, incorporated into a 1980s building called Well Court. It is visible through a window of that building on Farringdon Lane. Access to the well is managed by Islington Local History Centre and visits can be arranged by appointment.

The Monastic Order of the Knights Hospitallers of St John of Jerusalem had its English headquarters at the Priory of Clerkenwell. (The Blessed Gerard founded the Order to provide medical assistance during the crusades.) St John's Gate (built by Sir Thomas Docwra in 1504) survives in the rebuilt form of the Priory Gate. Its gateway, erected in 1504 in St John's Square, served various purposes after the Dissolution of the Monasteries. For example, it was the birthplace of the Gentleman's Magazine in 1731, and the scene of Dr Johnson's work in connection with that journal. 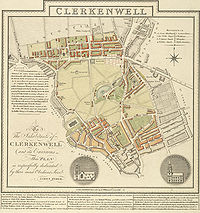 In modern times the gatehouse again became associated with the order and was in the early 20th century the headquarters of the modern Order of St John and of its St John Ambulance Association. An Early English crypt remains beneath the chapel of the order, which was otherwise mostly rebuilt in the 1950s after wartime bombing. The notorious deception of the "Cock Lane Ghost", in which Johnson took great interest, was perpetrated nearby.

Adjoining the priory was St Mary's nunnery of the Benedictine order, now entirely disappeared, and St James's Church, rebuilt in 1792 on the site of the original church which was partly of Norman provenance. The Charterhouse, near the boundary with the City of London, was originally a Carthusian monastery. Following the Dissolution of the Monasteries the Charterhouse became a private mansion and one owner, Thomas Sutton, subsequently left it with an endowment as a school and almshouse. The almhouse remains but the school relocated to Surrey and its part of the site is now a campus of Barts and The London School of Medicine and Dentistry.

In the 17th century South Clerkenwell became a fashionable place of residence. Oliver Cromwell owned a house on Clerkenwell Close, just off the Green. Several aristocrats had houses there, most notably the Duke of Northumberland, as did people such as Erasmus Smith. Before Clerkenwell became a built-up area, it had a reputation as a resort a short walk out of the city, where Londoners could disport themselves at its spas, of which there were several, based on natural chalybeate springs, tea gardens and theatres. The present day Sadler's Wells has survived as heir to this tradition, after being rebuilt many times and many changes of use including pleasure gardens, theatre, aquatic display venue, circus, music hall. Today it is a leading theatre and modern dance venue.

Clerkenwell was also the location of three prisons: the Clerkenwell Bridewell, Coldbath Fields Prison (later Clerkenwell Gaol) and the New Prison, later the Clerkenwell House of Detention, notorious as the scene of the Clerkenwell Outrage in 1867, an attempted prison break by Fenians who killed many in the tenement houses on Corporation Row in trying to blow a hole in the prison wall.

The Industrial Revolution changed the area greatly. It became a centre for breweries, distilleries and the printing industry. It gained an especial reputation for the making of clocks and watches, which activity once employed many people from around the area. Flourishing craft workshops still carry on some of the traditional trades, such as jewellery-making. Clerkenwell is home to Witherby's, Britain's oldest printing company. The company, which was established in 1740 and whose shareholding is mainly family-held, produces a wide variety of commercial work such as magazines, leaflets, report and accounts, brochures and information packs at its on-site print facility.

After the Second World War, Clerkenwell suffered from industrial decline and many of the premises occupied by the engineering, printing publishing and meat and food trades (the last mostly around Smithfield) fell empty. Several acclaimed council housing estates were commissioned by the council. Modernist architect and Russian émigré Berthold Lubetkin's listed Spa Green Estate, constructed 1943–1950, has recently been restored. The Finsbury Estate, constructed in 1968 to the designs of Joseph Emberton includes flats, since altered and re-clad.

A general revival and gentrification process began in the 1980s, and the area is now known for loft-living in some of the former industrial buildings. It also has young professionals, nightclubs and restaurants and is home to many professional offices as an overspill for the nearby City of London and West End. Amongst other sectors, there is a notable concentration of design professions around Clerkenwell, and supporting industries such as high-end designer furniture showrooms. It is claimed that the area has the highest concentration of architects and building professionals in the world. Many of London's leading architectural practices have offices in the area.