Staines-upon-Thames or simply Staines is a suburban town on the River Thames in western Middlesex, its western edge falling on the Colne Brook Old Course, which forms the county's border with Buckinghamshire. It is considered to be part of the London commuter belt. Built around an older town centre, Staines is today largely suburban development. It is close to the M25 motorway.

The town's ancient name is Staines. The suffix -upon-Thames, though borne by other towns on that river, was adopted only in 2012, as a way to improve the aesthetics of the town's name.

Staines has a fairly compact town centre mainly focused on a wide pedestrianised High Street, housing familiar high street chain stores. Smaller independent units can be found in Church Street and at the eastern end of the High Street.

A market in the pedestrianised High Street is held every Wednesday and Saturday.

A moderately-sized shopping centre (Elmsleigh) stands directly behind the High Street. A retail park was opened in 2002 called Two Rivers which is bisected by the confluence of the rivers Wraysbury and Colne.

There has been a crossing of the River Thames at Staines since Roman days. The emperor Claudius invaded Britain in AD 43 and they settled in Staines the same year. Soon after this invasion the first Staines Bridge was constructed to provide an important Thames crossing point on main road from Londinium (London) to Calleva Atrebatum (Silchester). The Roman name for Staines was ad Pontes (plural "at the bridges") implying that there was more than one bridge and it is believed that these bridges traversed Church Island.[1]

A border stone, on the bank of the River Thames, dated 1280, still remains, indicating the western limit of the City of London's jurisdiction over the Thames. Although familiarly known as the "London Stone", it is not to be confused with the more famous, and probably more ancient, London Stone in Cannon Street in the City of London.

The situation of Staines as a major crossing point over the River Thames, its position on the main road from London to the south-west, and its proximity to Windsor has led to the town's being involved in national affairs. The barons assembled there before they met King John at Runnymede in 1215, and Stephen Langton held a consecration there shortly after the issue of Magna Carta. Sir Thomas More was tried in 1535 in a Staines public house, to avoid the outbreak of plague in London at that time. Kings and other important people must have passed through the town on many occasions: the church bells were rung several times in 1670, for instance, when the King Charles II and Queen Catherine journeyed through Staines.[3]

During the period 1642–48 there were skirmishes on Staines Moor and numerous troop movements over Staines Bridge during the Civil War.

Staines was a site for a horse change on The Trafalgar Way in 1805, announcing the victory over the Spanish and the death of Nelson. This is commemorated on a plaque on Staines town hall. 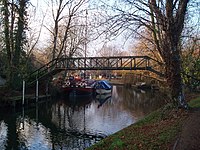 Boats by the Thames

Staines was the major producer of linoleum, a type of floor covering, after the formation of the Linoleum Manufacturing Company in 1864 by its inventor, Frederick Walton. Linoleum became the town's main industry and was a major employer in the area up until the 1960s. In 1876 about 220 and in 1911 about 350 people worked in the plant. By 1957 it employed some 300 people and in 1956 the factory produced about 2.675 m2. of linoleum each week. The term 'Staines Lino' became a worldwide name but the factory was closed around 1970 and is now the site of the Two Rivers shopping centre completed circa 2000. A bronze statue of two lino workers in Staines High Street commemorates the Staines Lino Factory. The Spelthorne Museum in Staines has a display dedicated to the Linoleum Manufacturing Company.

Staines was the site of the Staines air disaster in 1972, at the time the worst air crash to have occurred on British soil, until the Lockerbie disaster of 1988. The crash was commemorated in June 2004, with the opening of a dedicated garden, created at the request of relatives, near to the crash site, and the unveiling of a stained glass window at St Mary’s Church, where a memorial service was held.

The proximity to London and to Heathrow Airport have attracted a number of companies, with many large electronic companies based in Staines.

Staines is the home of the fictional character Ali G, which was not well received locally, given the character's declared attitude to his home town.

In November 2010, the Spelthorne Business Forum suggested that the town’s name be changed to "Staines-on-Thames", a suggestion was not well received in all quarters locally.[4] The reason given was to help identify to potential investors where Staines is, though the publicity surrounding this suggestion made much of the negative image alleged to have been generated by Ali G. The change was finally made in 2012.

Nearby towns and villages

Staines' neighbouring towns and villages are Egham, Wraysbury, Ashford, Stanwell, Laleham and Chertsey. About three miles north-east of Staines is Heathrow Airport, the busiest in Britain.