Shepperton is a largely suburban town in south-western Middlesex. It runs down to the banks of the River Thames to the south and in the northwest it is bisected by the M3 motorway. Shepperton is equidistant between Chertsey (across in Surrey) and Sunbury-on-Thames, Middlesex.

Shepperton is mentioned in documents are early as the Domesday Book as an agricultural village. In the early nineteenth century resident writers and poets included H Rider Haggard, Thomas Love Peacock, George Meredith and Percy Bysshe Shelley, allured by the Thames which was painted at Walton Bridge here in 1754 by Canaletto and in 1805 by J M W Turner.

The suburbanisation of Shepperton began in the mid to late nineteenth century with the construction in 1864 of its railway largely owing to its manor owner W S Lindsay which was originally envisaged to extend beyond the village to serve the market town of Chertsey across the river. Shepperton's relative closeness to London coupled with improvements to the river such as Shepperton Lock built in 1813 helped it to develop into a suburban settlement where merchants and professionals chose to construct and rent villas in its smog-free environs and commute daily to the city.

With its commuting links and its film studios and production facilities, since the 1930s Shepperton has continued to bring in new homes and residents as a commuter settlement, rising from roughly 1,810 residents in the early twentieth century to a little short of 10,000 in 2011. Expansion continues in the form of occasional new housing developments; however, much of the land is now urbanised or designated parkland. Its Metropolitan Green Belt has the Swan Sanctuary and two Sites of Special Scientific Interest, one of which is managed by the local Wildlife Trust. Most undeveloped land is protected from new development.

The name is an early abbreviation of 'Shepherd's Town', from the Old English Sceaphierd tun. The name of one of the older streets, Sheep Walk, reflects its pastoral origin.

Shepperton in the Domesday Book of 1086 was recorded as Scepertone. It had a population of 100 and was held by Westminster Abbey; (excluding any wood, marsh and heath) having 8 hides, pasture for 7 carucates, 1 weir worth 6s 8d. In total the annual amount rendered was £6.[1]

The Church Lane/Square area, leading to and next to the river predates by several centuries the High Street as the village nucleus. When the railway station was built a mile to the north, linking Shepperton to London Waterloo station, the village expanded into its northern fields from its opening in 1864, which was largely due to contributions of its manor owner W. S. Lindsay.[2]

The River Thames was important for transport from the late 13th century and carried barley, wheat, peas and root vegetables to London's markets; later timber, building materials such as bricks, sand and lime, and gunpowder, see the Wey Navigation.

George Eliot's Scenes of Clerical Life telling the Sad Fortunes of The Rev. Amos Barton, its curate, gives a vivid picture of church and village in the early 19th century. A large net income of rents and tithes of £499 per year was paid to the rectory belonging to S. H. Russell in 1848; this compared to £600 of poor relief, including for its workhouse paid in 1829.[2][3]

Three denominations have churches in Shepperton:

St Nicholas Church St Nicholas, architecturally listed, stone-clad on the preserved village square has a business pastoral life within and without the parish.

Leading to this is a short, since 1989 bypassed, winding lane from the High Street to Church Square, flanked by Shepperton Manor and the cricket ground, with some listed walls. Sir Nikolaus Pevsner described the view looking towards the south-east of the square with its now listed buildings and river opening as "one of the most perfect village pictures that the area has to offer". It offers two pub/restaurants including the first of the chain Blubeckers[4][5] and two hotels, the Anchor Hotel[6] and the Warren Lodge Hotel.[7] In this little square there is also the King's Head public house.[8]

The riverside manor, late 18th century, (its predecessor, as with the church here, predates the 12th century),[9] features a room painted and rendered to look like a tent or draped damask. Also Grade II* listed is the c.1500[2] timber framed Old Rectory refronted in the early 18th century and including a reception hall built in 1498.[10] Its front cladding has mathematical tiles.

Listed in the same high category of listed building is the parish church, St Nicholas' - its dedication is as with the ancient riverside churches of Thames Ditton and Chiswick.[11]. Also architecturally Grade II* is restored half timbered Winches Cottage on the west side of the lane which is 17th century.[12] 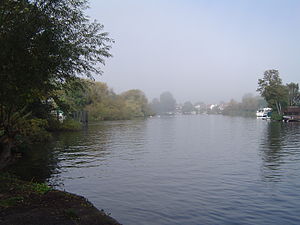 View up the River Thames towards Lower Halliford

The town includes the neighbourhood of Lower Halliford, formerly a near but separate hamlet, which historian Susan Reynolds places at the eastern end of a reduced, river bend-consumed half of the early mediæval village, east of the Old Shepperton Conservation Area due to erosion.[2][13]

This area is typified by a small number of detached classical three-storey 18th century riverside houses high on the riverside road on the outside of the river bend; the bend being flanked by riverside meadows with small boat moorings, low rise chalet-style houses to the south west, the Las Palmas Estate, named after the land once being that of the Spanish Ambassador; further west by the wooded Shepperton Cricket Club and by the village Green, Bishop Duppas Park to the east, formerly Lower Halliford Common and in a small part owned by the Old Manor House (Halliford).[14]

Halliford Manor, confusingly also called The Old Manor, dates to at least the 13th century and ownership became royal, being held by Elizabeth I and the Queens of both Charles I and Charles II. The Bishop of Winchester, Brian Duppa (1588-1662) owned the waterside meadows adjoining to the south. Wealthy writers built or expanded homes here in the 19th century, primarily as summer residences, such as H Rider Haggard, Thomas Love Peacock, George Meredith and Percy Bysshe Shelley.[2]

The Old Manor became yet another rebuilt Georgian house. The house which features a modillioned eaves cornice and glazing-bar sash windows to the first floor. Halliford School in the centre of this area was the 18th-19th century home of Emma Hamilton, mistress of Admiral Nelson.[15][16]

The 21st century fully renovated hotel and restaurant (formerly the Ship), Harrison's with river views[17] is here beside the shorter Red Lion public house which in turn has a narrow, secluded south-facing public house picnic area overlooking the relatively narrow, non-tidal river Thames. It is for this reason a bridge and ferry was recorded here from 1274 to 1410.

The field land and large houses on this estate were bought by Lyon Homes from landowner and developer Edward Scott in the 1950s.

This estate of buildings on this street are in a conservation area for proving a successful modular development in geometric, white-painted modernism from in the 1960s, one of very few private sector estate housing experiments of the 1960s with terraced, white panelled communal landscaped front gardens by Swiss architect Edward Schoolheifer; this American Radburn style was also used by Eric Lyons Span Developments in Ham Common, Richmond, Surrey, Blackheath, Kent and New Ash Green, Kent.

Shepperton has a traditional high street, shorter than the nearby Ashford with two medium size supermarkets, the village hall, library, shops, bank, hairdressers, a wide range of restaurants, a public house and a café, and has the railway terminus at one end.

Shepperton railway station saw high ticketed entries and exits for a settlement of its size to 422,000 (6 April 2010-5 April 2011), being a terminus with main commercial destinations being in the City of London, Kingston upon Thames commercial hubs of western Middlesex and Surrey accessed along the route, this is supplemented by secondary school usage, with a substantial state school and private school.[19]

Shepperton Studios are home to a multi-disciplinary film production facility from on-set, through to television and various forms of animation. This also acts as a base for on-location film work for television dramas in the South East and in films, for instance for productions partly shot in the Burnham Beeches woods less than 10 miles away.

In the 1930s its manor's core, which covered 60 acres, was converted into television and film production lots. This was reduced into 20 acres in 1973 and is Shepperton Studios, due to its small nature named after instead the post town of Shepperton instead. Countless films have been produced or shot wholly or in part on the studio's 15 stages, other lots or in its extensive animation facilities.

Lower Halliford, a completely contiguous so also integral part of Shepperton, is home to Halliford Film Studios, opposite the Manygate Lane conservation area, built in 1955 and one of the very first film studios devoted to TV commercial production. It is a fully independent film studio used for commercials, small television productions and other short "promos".[20]

At Shepperton lived the author J G Ballard and provides the setting for his novels Crash (in which a couple become aroused through car crashes; it was written as the M3 motorway was being built past the end of his street) and The Unlimited Dream Company.[21] The literary distinctiveness of his work has given rise to the adjective wikt:Ballardian|Ballardian", defined by the Collins English Dictionary as "resembling or suggestive of the conditions described in J. G. Ballard's novels and stories, especially dystopian modernity, bleak man-made landscapes and the psychological effects of technological, social or environmental developments."[22]

Shepperton is mentioned in the novel The War of the Worlds by H G Wells, in which its destruction is described along with nearby villages.

J M W Turner painted in 1805 two scenes of the shimmering river and fishermen on the far banks of the Lower Halliford part of Shepperton including the wide landscape work Walton Bridges widely exhibited in 1807 following a previous similar work by Canaletto of the scene in 1754.[23][24][25]

There are recreation grounds for football on both sides of the M3: one in Shepperton Green and two in Shepperton/Lower Halliford; one has adjoining tennis courts.

Through the town runs the Thames Path and there are popular adjacent flat cycling routes to Windsor, Hampton Court Palace and Richmond.

Desborough Sailing Club is based here with its own dinghy basin, private inlet and secluded reach of the river Thames and international medal-winner training club Queen Mary Reservoir Sailing Club lies between Shepperton and Ashford.

Angling is substantial at Halliford Mere fisheries and on the River Thames itself.[26]

Shepperton has a thriving cricket club, which has teams in the Fullers Surrey County League.[27]