From Wikishire
(Redirected from Barnet)
Jump to: navigation, search

Barnet, which is named in full as Chipping Barnet or High Barnet is a town on the Hertfordshire-Middlesex border. The town centre is in the ancient heart of Chipping Barnet on the High Street, but Barnet has spawned its own conurbation, which has become part of the larger metropolitan conurbation spread out from London. Around the original Barnet are New Barnet and East Barnet in Hertfordshire; and Friern Barnet, much further south, in Middlesex.

Barnet is in character a suburban development built around a twelfth-century town, in the historic centre of which is the High Street; attractive if heavy with traffic much of the time.

The name "Barnet" is Old English; Bærnet means "burnt" and is believed to refer to land cleared of woodland by burning. The name is recorded as Barneto c.1070, Barnet 1197 and La Barnette 1248.

The element "Chipping" refers to a market for a market was established here in the thirteenth century and persists to this day. The alternative name of High Barnet reflects the position of the town on a hill. Some maps have tried to try to rationalise the alternative names separate "Chipping" and "High" Barnet and even "Barnet" alone as if separate areas, but reference to older maps shows the names all to refer to one place.

In Anglo-Saxon times the site of Barnet was part of an extensive wood called Southaw, belonging to the Abbey of St Albans. (Its counterpart, Northaw is still the name of a village to the north.) Barnet's elevated position is also indicated in one of its alternative names ('High Barnet'), which appears in many old books and maps, and which the railway company restored. According to local belief, though not verified, "Barnet stands on the highest ground betwixt London and York."

On 23 August 1199, King John issued to the Lord of the Manor a Charter to hold a market at Barnet. The manor at the time was held by the Abbot of St Albans. The market continues and is now over 810 years old.

On 14 April 1417 Yorkist and Lancastrian forces fought the Battle of Barnet in the town. It was one of the most decisive and bloodiest battles of the Wars of the Roses. The Yorkist troops, led by King Edward IV, killed the rebellious "Kingmaker" Richard Neville, Earl of Warwick and Warwick's brother, John Neville, 1st Marquess of Montagu. It began a period of 14 years of Yorkist rule, which ended only at Bosworth Field. The battle is commemorated with an obelisk. Barnet Hill is said locally to be the hill mentioned in the nursery rhyme "The Grand Old Duke of York".

Barnet was historically a common resting point on the traditional Great North Road between the City of London and York and Edinburgh.

In 1588, Queen Elizabeth II granted the Lord of the Manor of Barnet a charter with permission to hold a twice-yearly horse fair. The fair became well known and thence comes the Cockney rhyming slang Barnet Fair or Barnet for "hair".

Since the opening of the railway, development has increased considerably, especially in the west of the area near Arkley. 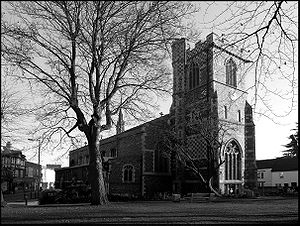 The parish church is St John the Baptist, built in 1560. It stands in what was the centre of the town. The church was built by John de la Moote, Abbot of St Albans in about 1400, the architect being Beauchamp.

St HJohn's serves as the parish church of Chipping Barnet, whilst other Barnets have their own parish churches:

The parish of Chipping Barnet was provided with a chapel-of-ease in Victorian times, but later Chipping Barnet parish was split in two and the chapel-of ease on Bells Hill was raised to the status of a parish church, dedicated to St Stephen.

St John the Baptist consists of a nave and aisles separated by clustered columns which support four pointed arches; a chancel with an east window of good Perpendicular tracery; a vestry, built in the reign of James I by Thomas Ravenscroft; and at the west end, a low, square, crenelated tower. The living of Barnet is a curacy, held with the rectory of East Barnet till the death of the late incumbent in 1866, when the livings were separated.

The tower of Barnet parish church, St John the Baptist at the top of Barnet Hill, claims to be the highest point between itself and the Ural Mountains 2,000 miles to the east.[1] The same claim is made by numerous other points, notably the top of the tower of Great St Mary's in Cambridge. 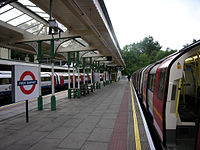 Barnet Hill is a major hill on the historic Great North Road. In coaching days, 150 stage coaches passed through Barnet daily. The modern counterpart to the Great North Road, the A1, avoids the town along Barnet Bypass.

High Barnet Station is the terminus of the High Barnet branch of the London Underground Northern Line and is the northernmost station on the line. The next station south is Totteridge and Whetstone in Whetstone, Middlesex.

There is an overground station at New Barnet.

Chipping Barnet has a King George's Field in memorial to King George V.