Southall is a town in western Middlesex. It is known for its heavily South Asian population and has been nicknamed "Little India". Neighbouring places include Yeading, Hayes, Hanwell, Heston, Hounslow, Greenford and Northolt. The area is identified in the London Plan as one of 35 major centres in in the metropolitan conurbation.[1]

Southall is located on the Grand Union Canal (formerly the Grand Junction Canal) which first linked London with the rest of the growing canal system. It was one of the last canals to carry significant commercial traffic (through the 1950s) and is still open to traffic and is used by pleasure craft.

The name Southall derives from the Anglo-Saxon dative æt súð healum, "At the south corner (of the land or wood)" and súð heal, "South corner" and separates it from Northolt which was originally norþ heal, "North corner" which through a later association with Anglo-Saxon holt, "Wood, copse" developed into Northolt.

The district of Southall has many other Anglo-Saxon place-names such as Elthorne and Waxlow. Its earliest record, from ad 830, is of Warberdus bequeathing Norwood Manor and Southall Manor to the archbishops of Canterbury.

Southall formed part of the chapelry of Norwood in the ancient parish of Hayes, in the Elthorne hundred of Middlesex.[2]

The southern part of Southall (roughly south of the railway) used to be known as Southall Green (and a section of the main north-south road in the area is still called The Green) and was centred on the historic Grade-II*-listed Tudor-styled Manor House[3] which dates back to at least 1587. A building survey has shown much of the building is original, dating back to the days when Southall Green was becoming a quiet rural village. Minor 19th and 20th century additions exist in some areas. It is currently used as serviced offices.[4]

The extreme southernmost part of Southall is known as Norwood Green. It has few industries and is mainly a residential area, having remained for many years mainly agricultural whilst the rest of Southall developed industrially. 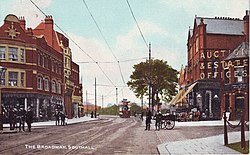 A tram from Hayes in the Broadway c.1905

The main east west road through the town is Uxbridge Road (A4020), though the name changes in the main shopping area to The Broadway and for an even shorter section to High Street. Uxbridge Road was part of the main London to Oxford stagecoach route for many years and remained the main route to Oxford until the building of the Western Avenue highway to the north of Southall in the first half of the 20th century. First horse drawn, then electric trams (until 1936) and, then, electric trolleybuses, gave Southall residents and workers quick and convenient transport along Uxbridge Road in the first half of the 20th century before they were replaced by standard diesel-engined buses in 1960.[5]

The opening of the Grand Junction Canal (later renamed Grand Union Canal) as the major freight transport route between London and Birmingham in 1796 began a commercial boom, intensified by the arrival of Brunel's Great Western Railway in 1839, leading to the establishment and growth of brick factories, flour mills and chemical plants which formed the town's commercial base. In 1877, the Martin Brothers set up a ceramics factory in an old soap works next to the canal and until 1923, produced distinctive ceramics now known and collected as Martinware.

A branch railway line from Southall railway station to the Brentford Dock on the Thames was also built by Isambard Kingdom Brunel in 1856. It features one of his (impressive for the period) engineering works, the Three Bridges (although it is still often referred to on maps by the original canal crossing name of Windmill Bridge). where Windmill Lane, the railway and the Grand Union Canal all intersect – the canal being carried over the railway line cutting below in a cast-iron trough and a new cast-iron road-bridge going over both. Brunel died shortly after its completion. Sections of his bell-section rail can still be seen on the southern side being used as both fencing posts and a rope rail directly under the road bridge itself. It is listed as a Scheduled Ancient Monument. The other notable local construction by Brunel is the Wharncliffe Viaduct which carries the Great Western Railway across the River Brent towards London and which was Brunel's first major structural design.

Otto Monsted, a Danish margarine manufacturer, built a large factory at Southall in 1894. The factory was called the Maypole Dairy, and eventually grew to become one of the largest margarine manufacturing plants in the world, occupying a 70-acre site at its peak. The factory also had its own railway sidings and branch canal. The Maypole Dairy Company was later acquired by Lever Brothers who, as part of the multinational Unilever company, converted the site to a Wall's Sausages factory which produced sausages and other meat products through until the late 1970s.

At the beginning of the twentieth century, the old parish church of Southall, St John's, which had been rebuilt in 1837-8, was found to be too small for its congregation and, as a result, emigrated to a new building in Church Avenue, which was completed in 1910. The original church building, in Western Road, is now a youth centre.[6]

The Quaker Oats Company built a factory in Southall in 1936. Part of the operation that made pet foods was sold to Spiller's in 1994, and the remainder to Big Bear Group in 2006. The site continues to produce brands such as Sugar Puffs. Other engineering, paint and food processing factories prospered for many years, mostly alongside the railway and/or canal. A collection of Martinware – salt-glazed stoneware, and birds – is on display at Southall Library.

On the eastern boundary of Southall was the Hanwell Asylum, once the world's largest asylum for the mentally ill. It was considered in its day to be a progressive institution with a good success rate for treatment. As attitudes to and treatment for mental illness improved, the site was renamed St Bernard's Hospital. In the late 1970s, the site was extensively redeveloped, with most of the area now taken up by the Ealing Hospital. St Bernard's still operates a large facility on part of the site.

Southall was the home of Southall Studios, one of the earliest British film studios. It played a historic role in film-making from its creation in 1924 to its closure in 1959. In 1936, a fire destroyed the studio but it was rebuilt and enlarged. Numerous feature films (many featuring famous or later-to-be-famous actors) and the early TV series Colonel March of Scotland Yard were made at the studios, as were TV and cinema adverts.[7]

There has been a locomotive works at the Southall Depot for nearly 150 years. Originally a Great Western Railway shed, it was possibly the last London steam depot, outlasting Old Oak Common and Stewarts Lane depots. The depot was later used for DMU maintenance and as a base for the electrification programme. Currently the site, now referred to as the Southall Railway Centre, is used by three independent groups, including Locomotive Services (where volunteers can contribute to the preservation and restoration of mainline locomotives) and the Great Western Railway Preservation Group. 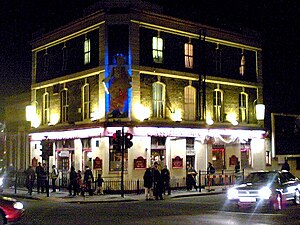 The bus and commercial vehicle manufacturer Associated Equipment Company (AEC) was based in Southall, on a 60-acre triangular site between Windmill Lane, the main Great Western Railway and the branch to Brentford Dock. The company moved there from Walthamstow in 1926 and closed in 1979 after losing market share whilst part of the giant but inefficient British Leyland group. The site was noticeable to railway passengers and to motorists on Uxbridge Road due to large signs proclaiming "AEC - Builders of London's Buses for 50 years".

A major gas works manufacturing town gas was located between the railway and the canal. In 1932 a large gasholder was built which has been a noticeable landmark ever since as it can be easily observed from a long distance away. Painted on the north east side of the gasholder are the large letters 'LH' and an arrow to assist pilots locate Heathrow Airport's (now closed) runway 23 when making visual approaches. The letters were painted in the mid 1960s after a number of pilots became confused between Heathrow and the nearby RAF Northolt (which has a similar, though smaller, gasholder under its approach at Harrow). Northolt has a much shorter runway and is not suitable for very large aircraft although one Boeing 707 did land at Northolt by mistake [8] and a number of other aircraft had to be warned off by air traffic control at the last minute. Since town gas production ceased in the 1970s with the arrival of natural gas piped from the North Sea, much of the site has been vacant, due to limited road access and remaining gas infrastructure.

During World War II Southall was the target of enemy bombing on a number of occasions. A German V-1 flying bomb destroyed a number of houses in Regina Road, killing the occupants.[9] Bomb shelters and bunkers were built during the war, close to or under most schools and public buildings. The bunkers at Hamborough Primary School were expanded during the Cold War, to become the North West Group War HQ for the London area Civil Defence organisation and the Ealing Emergency Control Centre. This facility is now disused.[10] 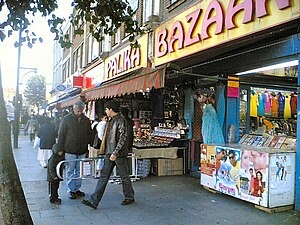 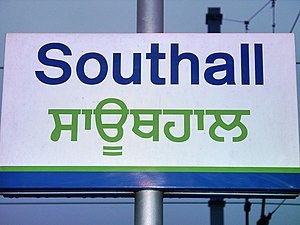 Station sign in English and in Punjabi, in the Gurmukhī alphabet

Southall is primarily a South Asian residential district, sometimes known as "Little India".[11][12][13][14][15] In 1950, the first group of South Asians arrived in Southall, reputedly recruited to work in a local factory owned by a former British Indian Army officer. This South Asian population grew, due to the closeness of expanding employment opportunities such as London Heathrow Airport. The most significant cultural group to settle in Southall are Asians. According to the Commission for Racial Equality, over 55% of Southall's population of 70,000 is Indian/Pakistani.[16][17] There are ten Sikh Gurdwaras in Southall. The Gurdwara Sri Guru Singh Sabha, which opened in 2003, is one of the largest Sikh gurdwaras outside India, and it won the Ealing Civic Society Architectural Award in 2003. There are two large Hindu 'Mandir' temples, the Vishnu Hindu Mandir on Lady Margaret Road and the Ram Mandir in Old Southall. There are more than ten Christian churches including five Anglican, one Roman Catholic (St Anselm's Church), Baptist, Methodist and several Pentecostal or Independent. There are three Mosques in Southall, the Abubakr Mosque situated on Southall broadway, the Central Jamia Masjid Mosque and the Jamia Masjid Islamic Centre.[18]

In addition, the signs on the main railway station are bilingual in English and Gurmukhi, which is one of the written scripts of Punjabi.

The main street in Southall is called The Broadway. Southall contains the largest South Asian shopping area within the M25. Southall was also the main location for the internationally acclaimed film Bend It Like Beckham.

Southall was also the location of the famed Glassy Junction public house, which was the first pub in the UK to accept Indian Rupees as payment. The Glassy Junction closed down in 2011 and has since been replaced by an international South Indian restaurant chain.

Southall has also appeared in other Bollywood films, including Patiala House and Goal!.

Other notable local pubs include The Three Horseshoes in Southall Broadway, by the architect Nowell Parr.

The local football club Southall F.C. has a long history, having been formed in 1871 and nurtured past players such as Les Ferdinand, who went on to play for the national team. In 2007/08 they played in the Middlesex County League.

Southall is served by Southall railway station on the Great Western Main Line, providing links to and from Heathrow Airport, Reading and Oxford as well as London Paddington.

There is an express coach service between Southall, Leicester and Birmingham which specialises in serving the many family connections in both areas' South Asian populations.