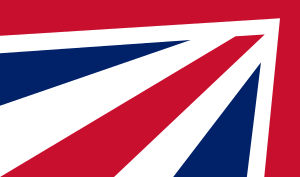 Flag of the Flag Institute, since 2016

The Flag Institute is a research and documentation centre on flags and flag information, in the United Kingdom. Its headquarters are at 38 Hill Street, Mayfair, London.

The Institute was formed out of the Flag Section of The Heraldry Society on St George's Day, 23 April 1971, by William Crampton, later President of Fédération internationale des associations vexillologiques, with Captain E.M.C. Barraclough, CBE RN, as its Chairman.[1][2] It is a membership-based vexillological organisation with over 500 members from all parts of the world, and provides advice and assistance to organisations including UK Government departments, the BBC, ITN, and many publishers, museums and libraries.[3]

The Institute maintains the William Crampton Library, based in Kingston upon Hull, Yorkshire and named in honour of its co-founder. Comprising over 40,000 flag related volumes it is thought to be one of the largest vexillology-based libraries in the world. It publishes a quarterly 24 page full colour journal, Flagmaster, and a virtual magazine called eFlags. Since 2006 it has sponsored an annual public lecture on a flag-related topic, known as the 'Perrin Lecture'. It holds twice yearly meetings for its members in various locations around the United Kingdom. The Institute itself is governed by a Council of ten members elected annually by members.

At a meeting of the Institute in May 2011, it was congratulated by the Secretary of State for Communities and Local Government, Eric Pickles, on its 40 years of existence. He said:[4]

"Let me start by congratulating the Flag Institute on its first 40 years. 40 years as a respected source of help and advice. Not only to the UK Government, but to the United Nations and other organisations around the world. 40 years of bringing together enthusiasts, educating the public, and spreading knowledge.....The UK is very lucky in having - in the Institute - a group of dedicated and informed people who do a great deal to make sure that that respect is given. In your first 40 years you have established your credentials not just in this country, but on the world stage."

The Institute maintains the UK Flag Registry as a definitive record of National, Regional and County flags.[5] Flag designs with which its officers have been involved include those for the badge and ensign of the UK Border Agency[6] and the flag of the UK Supreme Court.[7]

The current members of the Flag Institute Council are:[8]: