From Wikishire
(Redirected from Potter's Bar)
Jump to: navigation, search

Potters Bar is a town in the ancient parish of South Mimms in northern Middlesex. It is considered to be part of the London commuter belt.[1]

The town started life in the early 13th century and remained a small settlement until the arrival of the Great Northern Railway in 1850.[2]

The origin of the "Potters" component of the town's name is uncertain but is generally thought to have been derived from the Pottere family who lived in the parish of South Mimms[3] or from evidence of a Roman pottery thought to have been sited locally. The "Bar" component is thought to refer to the gates leading from the South Mimms parish and into the Enfield Chase parish, or possibly from some a toll bar on the Great North Road.[3] The original "Bar" is said to have been at what is now the Green Man pub, or at the current entrance to Morven House. 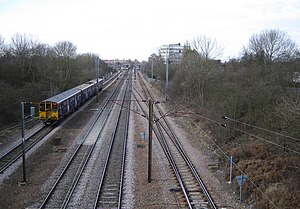 Potters Bar was within the historic parish of South Mimms. Its growth from a hamlet in the parish to a town in its own right, the northernmost town of Middlesex, can be attributed its position on the great transport routes.

The Great North Road, one of two road routes from the City of London to the north of England, ran through Potters Bar.[4] The road is today the A1000 (formerly the A1).

The railway came to Potters Bar in 1850 with the completion of the Great Northern Railway between London and Grimsby in that year. Potters Bar Station opened on the line on 7 August in that year. Between 1923 and 1971 the station was named 'Potter's Bar and South Mimms'. The railway was the foundation of Potters Bar as it is seen today, replacing the earlier hamlet with a substantial commuter town.

The A1 was built as a major 'arterial' road and a crossroads at Bignells Corner linked it to the Barnet to St Albans road. Potters Bar is now also served by junctions 23 and 24 of the M25 motorway.

Potters Bar railway station is the highest on the line between London's King's Cross Station and York. The First Capital Connect route serving Potters Bar links the town to various Middlesex suburbs in the southbound direction before terminating at either King's Cross or Moorgate Station. Northbound, the railway connects Potters Bar to Peterborough, Cambridge and Letchworth Garden City as well as towns en route to these destinations such as Hatfield, Welwyn Garden City and Stevenage.[5]

Potters Bar has a bus depot for local bus routes and longer routes to, for example, New Barnet, Arnos Grove, Enfield and Chingford in Middlesex and to St Albans, Waltham Cross, and Borehamwood in Hertfordshire.

Potters Bar falls within the Diocese of London. There are several churches in Potters Bar, which include:

There are four secondary schools in Potters Bar and the surrounding area; they are Chancellor's, Dame Alice Owen's, Goffs Oak and Mount Grace.

Mount Grace School is a mixed grant maintained School in Potters Bar opened in 1954.[7] The school used to be a Manor House which was turned into a school long ago.

Lochinver house school is an all boys preparatory school in Potters Bar, which opened in 1947.[8]

Dame Alice Owen's School is a mixed grant-maintained school in Potters Bar.[9] Originally founded in 1613 and based in Islington until the 1960s, Dame Alice Owen's School is unusual in its 'Visitation' and 'Beer Money' traditions.[10] The trustees of the Dame Alice Owen Foundation are the Worshipful Company of Brewers. It is a partly selective school (25% of its intake is on the basis of pupils doing well on its entry test). It also reserves some places for children from Islington. It specialises in languages, and offers GCSEs in a wide range of languages. It has recently become a music and science college on top of being a language college. Dame Alice Owen's is generally considered to be the best of the three secondary schools in Potters Bar, consistently performing better than Chancellors and Mount Grace in every way.

Potters Bar has a King George V Playing Field in memorial to King George V, which is situated behind the Furzefield Centre, a swimming pool and leisure centre run by Hertsmere District Council.[11] Also in the town is Potters Bar Town FC, Potters Bar Swimming Club (PBSC),[12] a tennis club, a cricket club, a golf course and the Wyllyotts Centre; a theatre, cinema and events venue. It is also the location of the town's museum.[13] Potters Bar is also home to the Hertfordshire Showband (formally known as the Marching Blues).[14]

In 1983, the area around Potters Bar was used for the on-location filming of the comic-horror film, Bloodbath at the House of Death. Also, in 2005, David Walliams and Matt Lucas shot two scenes for the third season of the comedy, Little Britain, one scene at Mount Grace School gym, the other at a wedding shop on the High Street.[15]