Hayes is a town in Middlesex, within the metropolitan conurbation, between Hillingdon to the north and Heathrow Airport to the south. The A40 trunk road runs through the northern part of Hayes.

Hayes has the character of a suburban development and was developed in the late 19th and 20th centuries as an industrial locality to which residential districts were later added in order to house factory workers. Its development is typical of the Second Industrial Revolution - the creation of new light engineering industries on the edge of existing cities. Hayes has a very long history, though, as the place-names of the area indicate. The town has a diverse population.

The place-name Hayes comes from the Old English Hæs, meaning "Brushwood", suggesting the sort of landscape hereabouts before the bulldozers moved in to build a town.

Until the end of the 19th century, the Hayes area was primarily an agricultural and brickmaking area. However, because of its location on the Grand Junction Canal (later called the Grand Union) and the Great Western Railway it had a number of advantages as an industrial location in the late 19th century. It was because of this proximity that the Hayes Development Company offered sites on the north side of the railway, adjacent to the canal.

The name "Hayes Town" is now typically applied to the area around Station Road between Coldharbour Lane and Hayes and Harlington railway station, but this is what used to be the hamlet called Botwell. The original Hayes Town was the area to the east of St Mary's Church on Church Road, from the north of Hemmen Lane to Freeman's Lane. The place-name Botwell is also Old English: Bot could mean either "healing" or it may be from a man's name (Bota), so Botwell may mean a "healing well".

Hayes has always been heavily involved with industry, both local and international, and is (or has been) the home of EMI, Nestlé and H. J. Heinz Company. Past companies include Fairey Aviation (later merged with Westland), and HMV.

An early occupier was the Gramophone Company, later His Master's Voice and latterly EMI. Only the EMI archives and some early reinforced concrete factory buildings (notably one [1912] by Evan Owen Williams) remain.

It was here in the Central Research Laboratories (generally known as "CRL") that Isaac Shoenberg developed (1934) the all-electronic 405-line television system (called the Marconi-EMI system, used by the BBC from 1936 until closedown of the Crystal Palace 405-line transmissions in 1985).

Alan Blumlein carried out his research into binaural sound and stereo gramophone recording here. "Trains at Hayes Station" (1935) and "Walking & Talking" are two notable films Blumlein shot in order to demonstrate stereo sound on film. These films are held at the Hayes EMI archive.

During the 1990s, CRL spawned another technology: Sensaura 3D positional audio. In an echo of Blumlein's early stereo recordings, the Sensaura engineers made some of their first 3D audio recordings at Hayes Station.

During the First World War the EMI factories produced aircraft. Charles Richard Fairey was seconded there for a short time, before setting up his own company, Fairey Aviation, which relocated across the railway. Needing an airfield to test his aircraft he secured a site in Heathrow village. It became the Great West Aerodrome, but was acquired by the Ministry of Aviation towards the end of the Second World War, and developed to become Heathrow Airport.

The Nestlé company located its major chocolate and instant coffee works on the canal, adjacent to the railway east of the station, and it was for many years the company's UK headquarters.

Opposite Nestlé on the other side of the canal, the Aeolian Company and its associates manufactured player pianos and rolls from just before First World War until the Great Depression. That, and the increasing sophistication of the gramophone record market, led to its collapse; its facilities were then exploited by Wall's, a meat processor and ice cream manufacturer.

From the early 1970s to 2003 McAlpine Helicopters Limited and Operation Support Services Limited (later renamed McAlpine Aviation Services Limited) operated from two purpose-built aircraft hangars in Swallowfield Way industrial estate, as the company operated on land already owned by the Sir Robert McAlpine group. The land on the other side of the Grand Union Canal is called Stockley Park (also owned by the group), and its buildings were intentionally positioned to allow safe passage for helicopters into the heliport in case of an emergency. Fortunately, this was never used.

Development as a suburb 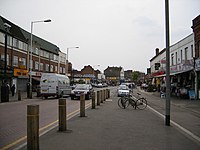 Since development, industry has been pre-eminent in Hayes. The provision of adequate housing did not begin until after First World War, with the creation of modest dwellings of the garden suburb type.

George Orwell, who adopted this pseudonym while living here, lived and worked in 1932-3 as a schoolmaster at The Hawthorns High School for Boys, situated on Church Road. The school has since closed and is now known as The Fountain House Hotel. Despite returning several times,[1] Orwell was characteristically acerbic about his time in Hayes, camouflaging it lightly as "West Bletchley" in Coming Up for Air, as "Southbridge" in A Clergyman's Daughter, and saying of it in a letter to fellow author and friend Frank Jellinek:

Hayes . . . is one of the most godforsaken places I have ever struck. The population seems to be entirely made up of clerks who frequent tin-roofed chapels on Sundays and for the rest bolt themselves within doors.[2]

St Mary the Virgin Church on Church Road is the oldest building in Hayes.

The central portion of the church, with the chancel and the nave, was built in the 1200s, the north aisle in the 1400s (as was the tower), and the south aisle in the 1500s, along with the lychgate and the south porch. Hayes's entry in the Domesday Book of 1086 makes no mention of a church or chapel and it may be that the 12th century church was the first built here.

The church has a 12th-century font, and many interesting memorials and brasses: the brass to Robert Lellee, Rector somewhere between 1356 and 1375, is purportedly the oldest brass in Middlesex. Adjacent to it is another to Rector Robert Burgeys (1408–1421). The church has a good collection of memorials from later centuiries: a reminder of Hayes before it was utterly transformed in the Industrial Age.

Some partly uncovered pre-Reformation wall-paintings and a large mural (dating from the 14th century) of Saint Christopher with the infant Child are on the North wall.

Victorian restorers donated a number of windows, and more recent additions include windows to Anselm of Canterbury and St Nicholas. The Coronation window is in the north aisle above the Triptych painted by the pre-Raphaelite Edward Fellowes Prynne. His brother George Fellowes Prynne carved the Reredos with Anselm and St George in the niches. The embossed roof of the Nave reflects the Tudor period with emblems of the crucifixion and the arms of Henry VIII and Catherine of Aragon; the manor fell to King Henry at the Reformation).

Besides the church, the other main building in mediæval villages was the manor house. The manor house formerly associated with the church was assigned to Canterbury Cathedral by the priest Warherdus as far back as AD 830.[3] The site of the original manor house is not known, but it is likely to have been on or near the site of the building latterly on Church Road called the Manor House, parts of which dated from the early 16th century. At the time of the Norman Conquest, Archbishop Lanfranc had contacts with the parish.

It is thought that Archbishop Anselm stayed in the manor house of St Mary's church.[4] The naming of St Anselm church, built in 1929 on Station Road in Hayes town centre, is a commemoration of this event.