Poplar is an old village in south-eastern Middlesex, now wholly absorbed into the metropolitan conurbation as part of the “East End”. It is found to the north of the great loop in the River Thames which forms the Isle of Dogs.

Poplar is today a mainly residential area, and has never been a prosperous one; its old, neglected streets stand in stark contrast to the plush Docklands developments built since the 1980s from the edge of Poplar and filling the Isle of Dogs to the south. The village centre is Chrisp Street Market. Poplar contains notable examples of public housing including the Lansbury Estate and Balfron Tower.

Historically a hamlet in the parish of Stepney, in 1817 Poplar became a civil parish in its own right. In 1900 the Metropolitan Borough of Poplar was formed of Poplar and surrounding communities, and this East End Council became a hotbed of revolutionary ideas; the borough council found itself hauled before the High Court on several notable occasions for its conduct, until abolished in 1965.

Architecturally Poplar is a mixture of 18th and 19th century terraced houses and 20th century council estates. There is evidence the district is undergoing gentrification, thought to be due to its proximity to the major business centre of Canary Wharf and nightlife of Shoreditch and Brick Lane.

St Matthias Old Church is located on Poplar High Street, opposite Tower Hamlets College. It is next to Poplar Town Hall – which has mosaic detail – and Poplar Bowls Club, which is part of Poplar Recreation Ground. A recently re-opened sports centre called The Workhouse stands on the site of Poplar Workhouse, where local politician Will Crooks spent some of his earliest years (a nearby council housing estate is named after him).

The Metropolitan Borough of Poplar was the location, in 1921, of the Poplar Rates Rebellion, led by the Mayor, George Lansbury, who was later elected as leader of the Labour Party. 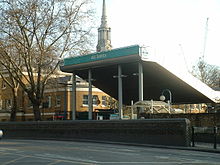 As part of the 1951 Festival of Britain, a new council housing estate was built to the north of the East India Dock Road and named the Lansbury Estate after George Lansbury. This estate includes Chrisp Street Market, which was greatly commended by Lewis Mumford. The same era also saw the construction of the Robin Hood Gardens housing complex (overlooking the northern portal of the Blackwall Tunnel) – designed by architects Peter and Alison Smithson – and the similarly brutalist Balfron Tower, Carradale House and Glenkerry House (to the north) – designed by Ernő Goldfinger. Other notable buildings in Poplar include Poplar Baths, finally closed in 1988, which local campaigners hope to get redeveloped.

During the development of the Isle of Dogs the street signs pointed to the new development (by the London Docklands Development Corporation, and Poplar was lost for a decade or more. 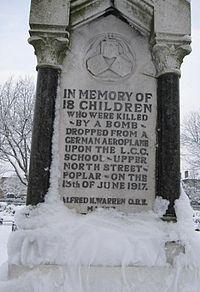 The first air raids on Britain took place during the First World War, as German Zeppelins followed the Thames to rain bombs down on London and in particular the East End; these early air raids caused significant damage and took many lives. In the first raid by fixed-wing aircraft, on 13 June 1917, in the East End alone 104 people were killed, 154 seriously injured and 269 slightly injured by shrapnel bombs from Zeppelins and Gothas. The gravest incident that day was a direct hit on a primary school in Poplar. In the Upper North Street School at the time were a girls' class on the top floor, a boys' class on the middle floor and an infant class of about 50 students on the ground floor. The bomb fell through the roof into the girls' class; it then proceeded to fall through the boys' classroom before finally exploding in the infant class. Eighteen children were killed, of whom sixteen were aged from 4 to 6 years old. The tragedy shocked the British public at the time.[1]

During the Second World War the East End of London was one of the most heavily targeted places and Poplar suffered badly. 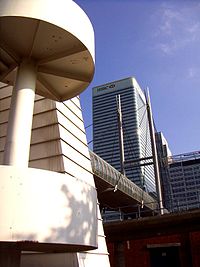 Poplar also contains several Seamen's Mission buildings, reflecting the area's long-standing connection to London's docks which for many years gave the area employment. The largest original mission stood on Hale Street, but the current mission stands on the north side of East India Dock Road. Having fallen out of favour as a Mission, the building became the local headquarters of the Gas Board (testament to which is the gas fired streetlights to the rear of the property); it then became a working men's club before it was finally converted into executive apartments.

Another smaller Seaman's Mission building is located at the east end of Follett Street, in the St Frideswide's Mission House Conservation Area,[2] called Christ Church House. This was built in 1898, the first stone being laid by the Rt. Hon. Sir John Robert Mowbray Bart MP. Although most of Follett Street was destroyed by the First World War bombings, this building survived and has now been converted into six apartments.

Many other notable buildings that survived the wartime bombings have been converted into apartments, suggesting that Poplar is joining other parts of East London in being gentrified. A good example is the old Spratt's factory.

In addition to the Seamen's Mission buildings, Poplar Hospital for Accidents opened in 1855 on the north side of East India Dock Road, with the main intention of treating injured dock workers. It suffered bomb damage in 1941 and was closed in 1975. The building was demolished to make way for private housing in 1982.[3]

The 1974 film Fly A Flag For Poplar is a documentary about Poplar and the people who live there, seen in their day-to-day lives and organising their own local festivals. Poplar today is looked at in the light of the past, the importance of the labour movement in the beginning of the century, highlighted by the great strikes and events of 1921 when the Poplar Council went to prison.[4]

Locations around Poplar have been used in the following feature films:

Balfron Tower has been featured in various other music videos, films and television programmes.

The nearest stations are: