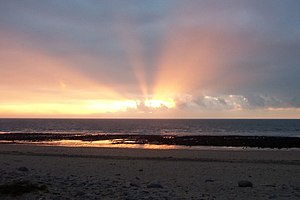 Carmarthen Bay is an inlet of the south Wales coast. The coastline includes famous beaches, including the Pendine Sands and Cefn Sidan sands, and is partially covered by the Pembrokeshire Coast National Park.

Carmarthen Bay and Estuaries is listed as Special Areas of Conservation by Joint Nature Conservation Committee.[1]

One area of the Carmarthen Bay coastline near Burry Port was used in the 1980s to test wind turbines. The first turbine to be installed in the area was switched on in November 1982. Five turbines of different designs were tested at the site, installed between 1982 and 1989. The site was deemed to have served its purpose by the late 1990s, and the turbines were removed with the land eventually being integrated into the Millennium Coastal Park.[2]