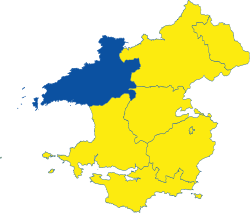 It originates as the pre-Norman cantref of Pebidiog:[1] one of the seven cantrefs of the Kingdom of Dyfed.

Named after Dewi Sant, the Welsh language name for Saint David,[2] Dewisland is in north-western Pembrokeshire, including the city of St David's and the peninsula on which it stands.[3] Almost all of the hundred was within the Marcher Lordship of the Bishop of St David's, and St David's was its civil and ecclesiastical headquarters. It was said to be divided into two commotes: Mynyw (Latin: Menevia) and Pencaer.[4]

Dewisland boasts of being the only part of Wales never conquered. The English before the Norman conquest did not get so far, and the Normans respected Dewisland as a possession of the Church, so that it was spared the fierce fighting which took place everywhere else when they conquered Wales.[5] Nevertheless, it was occupied by the Normans in the 12th century, and made part of the March, but remained exclusively Welsh-speaking, except for small English plantations in the City of St David's and at Abercastle and Letterston. These were extinct by the time of George Owen, who described the hundred as wholly Welsh-speaking.[6]

The Petty Sessions for the hundred were held at Solva.[7]