Eglwyswrw is a village and parish in the Hundred of Cemais, Pembrokeshire. The village lies between Newport and Cardigan at the junction of the A487 road and the B4332.

The parish is in the heart of the Welsh-speaking area of north Pembrokeshire. 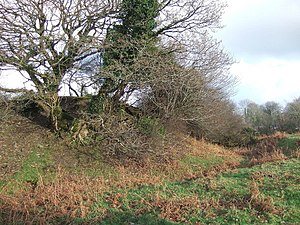 There is much of archaeological interest in and around Eglwyswrw,[1] and the village is recorded from Norman times; on the west side of the village is a small Norman motte.

The sacred nature of the site where the church now stands (see also Worship, below) may date back to before the 8th century, but there was a later Norman church, the earliest record of which is in 1291.[2]

The village hosted several important fairs, including Meigan Fair.[3] The district court met there - a function that is remembered in the name of the Serjeants Inn.

The population has remained fairly constant in the mid-hundreds since the beginning of the 19th century (OPCS):

The 2008 Royal Commission on the Ancient and Historical Monuments of Wales listed 82 sites of importance within the parish of Eglwyswrw.[6] 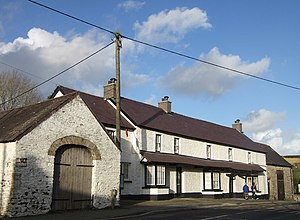 The Serjeants Inn, now a private residence, was a Grade II listed public house dating back to the 17th or 18th century, so named because the Cemais Assizes were held there. It closed in the 1990s. The village shop and Post Office closed in 2009 and a community project has been established to try to buy the inn and reopen it as a shop, cafe and heritage centre.[9] 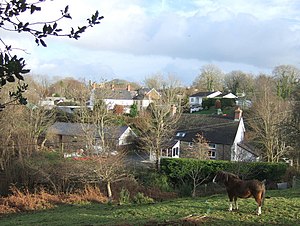 As well as self-catering accommodation, Eglwyswrw features a parish church, Norman remains, a community school and nearby attractions.[10]

A mediæval church of unknown date succeeded the Norman church, and it was noted in 1504 that the chancel was "ruinous, and the windows not glazed", with the blame falling on the Vicar, Dom. Phillip Lloyd. Similar accusations were made in 1684. In 1708 the church (then called Eglwys Yrrow) was reported as in good repair.

The present parish church of Saint Cristiolus[11] is situated in the centre of the village and dates from before 1829 when it was restored. It was restored again in 1883.[12] The Welsh placename of the village means "church of St Eirw",[13] and there once existed a chantry attached to the churchyard, in which this minor female saint was allegedly interred.

Eglwyswrw Community Primary School is a Welsh-Medium school for 116 pupils (2014) aged 4 to 11 years with a large rural catchment area.[14]

The Butcher's Arms featured in a 2004 Canadian Visa campaign highlighting difficult-to-pronounce placenames around the world. There was irony in the fact that the pub did not accept Visa cards.[15]