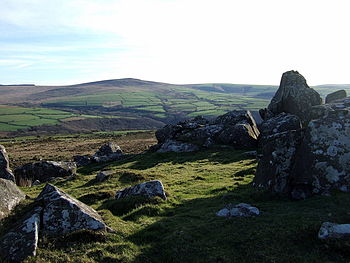 The Preseli Hills or Preseli Mountains are a range of hills in northern Pembrokeshire. They are renowned for their fair and lofty bearing and though reaching far inland they have been included all within the Pembrokeshire Coast National Park.

The hills rise to 1,760 feet above sea level at Foel Cwmcerwyn, which is Pembrokeshire's highest point. They are dotted with prehistoric remains, including evidence of Neolithic settlement. It was from these hills that vast stones were in ancient times, quarried to be borne, we know not how, all the way to Stonehenge.

The hills' name has been variously spelled: "Prescelly Hills" was once the common spelling. In Welsh they are Mynydd Y Preseli or Y Preselau.

During the Second World War, the War Office used the Preseli Hills for training exercises, which continued after the war.

In 1923 the petrologist Herbert Henry Thomas identified that bluestone from the Prescelly Hills corresponded to that used to build the inner circle of Stonehenge, and he concluded that the stones must have been brought from here to Salisbury Plain.[1] More recent geologists have identified specifically Carn Menyn as one of the bluestone sources.[2] The method by which the stones might have been taken is still unknown.

In historical times, slate quarrying was an important industry in the Preseli Hills. It has ceased to be important now, but remnants of the quarries can still be seen in Rosebush, Pembrokeshire. There is a workshop at Llangolman where slate is used to make a variety of craft items. 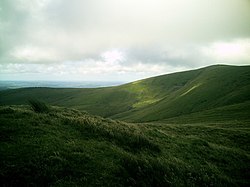 Historic sites within the Preseli Mountains and those of interest include: