Nevern is an ancient parish and hamlet of just a few houses in Pembrokeshire. Together with the adjacent settlements of Felindre Farchog, Monington, Moylgrove and Bayvil, constitutes the civil community of Nevern. It lies in the valley of the River Nevern close to the Preseli Hills of the Pembrokeshire Coast National Park east of Newport. 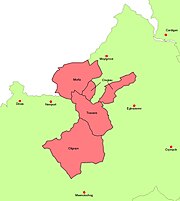 The ancient parish of Nevern and its Quarters 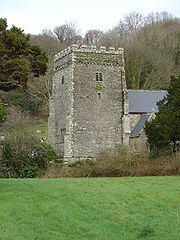 The Norman church of St Brynach is on the site of St Brynach's 6th century "clas", an important ecclesiastical centre. At the time when it is said that Dyfed had seven bishops, this was probably the seat of one. Except for the castellated tower, perilously undercut by the adjacent river Caman, most of the original Norman structure of the present building has been rebuilt. The church and churchyard are remarkable for the Celtic Cross and several inscribed stones.

The Nevern Cross on the south side of the church dates from the 10th century or early 11th century. It consists of two sections fitted together with a mortice and tenon joint, both cut from the local dolerite stone. It has classic braided decorations and inscriptions reading "dns" on one side and "h.an.eh" on the other.

In the Trewern Chapel in the south transept, two inscribed stones are set into the window sills. The Maglocunus Stone is inscribed in Latin "MAGLOCUNI FILI CLUTORI" and in Ogham "maglicunas maqi clutar.." and is of the 5th century or early 6th century. The Braided Cross is of the early 10th century. The churchyard also contains a "bleeding yew" that leaks red sap at certain times of the year.[1]

George Owen is buried here, and he is commemorated by a plaque in the Henllys Chapel behind the organ.

The castle was located on a spur of the hill 150 yards north-west of the church. Little remains of it now. It was the original headquarters of the Normans in the Marcher lordship of Cemais, built on the hill above the village by Robert fitz Martin around 1108. The castle was destroyed and Robert expelled during the rebellion of 1136. His son, William fitz Martin, regained both Nevern and Cemais via a marriage to a daughter of Rhys ap Gruffydd but was in turn driven out by Rhys about 1189. In 1197 William founded the nearby town of Newport, and transferred the headquarters of the Lordship to Newport castle. Nevern castle then ceased to be important.

There is a Pilgrim's Cross cut into the rock on the roadside between the village and the castle.

The Pentre Ifan cromlech and the Castell Henllys hillfort are in the parish, each about two miles from Nevern village as the crow flies. Nevern is slightly more than two miles from the small town of Newport.

The ancient parish of Nevern is the largest in Pembrokeshire (14,735 acres), and was divided into four "quarters": Crugiau, Morfa, Trewern and Cilgwyn. Cilgwyn extends to the far side of the Preseli Hills. The church is in Crugiau Quarter.

It was a marcher borough. Owen, in 1603, described it as one of nine Pembrokeshire "boroughs in decay".[2]