Newport is a small town in Pembrokeshire, standing on the south bank of the tidal reach of the River Nevern and climbing the hill behind. The town lies within the Pembrokeshire Coast National Park.

Newport look out over the estuary of the River Nevern. Here small boats are moored and a broad beach reaches out into the river, which beach gives the town its Welsh name ("beach town"). Apart from its beaches, Newport is known for the Carreg Coetan Arthur burial chamber and for the West Wales Eco Centre.

At the top of Castle Hill stands Newport Castle. 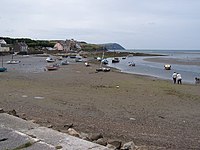 The town also lies on the Pembrokeshire Coast Path, has a youth hostel and is popular for walks in the Preseli Hills. Carn Ingli, the hill above the town, as an Iron Age hillfort. Some Bronze Age hut circles lies just outside the town.

The town was founded by the Norman lord, William FitzMartin about 1197. He was a son-in-law of The Lord Rhys, who nevertheless expelled him from his former base at nearby Nevern, which had been established by his father Robert fitz Martin. William founded Newport as the new capital of the Marcher Lordship of Cemais and it was a busy port founded primarily on the growing mediæval wool trade. It would remain within the FitzMartin family until the death of William, the 2nd Lord Martin, without male heir in 1326.

It is a marcher borough. Owen, in 1603, described it as one of five Pembrokeshire boroughs overseen by a portreeve.[1] It still retains some of the borough customs such as electing its own mayor, who beats the bounds on horseback every August.

The castle built by FitzMartin is situated on a spur of Carn Ingli and has a surpassing view of Newport and much of the surrounding countryside. Though in ruins since at least the 17th century, it is impressive due to its site, and a converted house incorporating the castle walls (facing west over the town, the bay and the Irish Sea) is still inhabited. 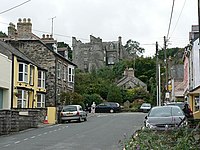 The church of St Mary's, sited below the castle though within the town, dates from the FitzMartin era, and the outside east apse bears their arms ("Argent, two bars gules").

In the 1880s the castle was associated with John Brett, who rented it as a base for his large family while he spent summers cruising the south and west coasts of Wales painting, sketching and photographing as he went. He was able to moor his 210-ton schooner, Viking (which had a crew of twelve) at Parrog.