Manorbier Castle is a Norman castle in Pembrokeshire, standing above the beach in the village of Manorbier, five miles southwest of Tenby. It was the original seat of the Anglo-Norman de Barry family.

Manorbier is a rectangular enclosure castle, curtain walls, and round and square towers. Its tower gateway was protected by a great door and portcullis as well as roof embrasures. There was no moat as the castle stands on a natural promontory facing the coast. A postern gate provided access to the beach and boats.

The inner ward of the castle

There was an outer ward that was defended by earthworks but no barbican. The main gateway to the inner ward is across a bridge and dry moat. The south-east tower is round but the north-east one is angular. The domestic range of the castle had kitchens, apartments and a Great hall that was built in the 1140s. Arrowslits were replaced by windows in the domestic range.

The Chapel, which was built around 1260, has elaborate vaulting and plaster-work. Some of the original mediæval frescoes can still be seen.

The castle was originally built on land granted to Odo de Barri, a Norman knight, at the end of the 11th century. Initially he constructed a Motte-and-bailey on the site which had a wooden keep defended by a palisade and earthworks embankments. But it was Odo's son, William de Barri, who began work on the stone fortification in the early part of the 12th century.

In 1146 Gerald of Wales, the great twelfth century scholar known as Geraldus Cambrensis was born at the castle. As the fourth son of William de Barri, he was related on his mother's side, to the legendary Welsh princess Nest verch Rhys. Gerald wrote of his birthplace:

In all the broad lands of Wales, Manorbier is the most pleasant place by far.

In the castle's history, it was only attacked twice; both were minor skirmishes. In 1327, Richard de Barri assaulted Manorbier in a dispute over family succession. Then 300 years later during the Civil War, the castle was seized in 1645 by Parliamentarian forces. It was then slighted to prevent further use by the Royalists.

Through the 17th and 18th centuries Manorbier was allowed to decay. However, in 1880, the castle was partially restored by J.R.Cobb, a tenant who carried out repairs on the buildings and walls. 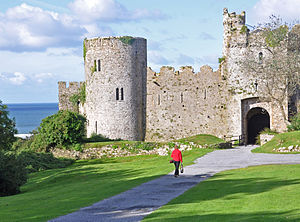 The entrance seen from the north east

The castle is open to the public. Along with the castle, there are also gardens, dovecote and mill. The castle is popular for wedding venues and has a holiday cottage which can be rented for wedding guests or private individuals wanting to stay in a castle.

The castle has appeared on film as a location, in particular: