Crymych is a village and parish of around 400 inhabitants in the north-east of Pembrokeshire, situated approximately 800 ft above sea level at the eastern end of the Preseli Mountains. It stands astride the old Tenby to Cardigan turnpike road, now the A478.

The village developed around the former Crymmych Arms railway station on the now-closed Whitland to Cardigan Railway.

About two miles SSW of Crymych stands a TV mast which, at 770 ft tall erected on land which itself is some 1,150 ft above sea level, can be seen from several counties away on a clear day.

The name Crymych translates into English as crooked stream, referring to the River Taf which rises in the high ground above the village and takes a sharp turn in the valley in the north end of the village.

First mentioned in an account of the Cemais Hundred of 1468, Crymych has for centuries been an area of livestock farming. 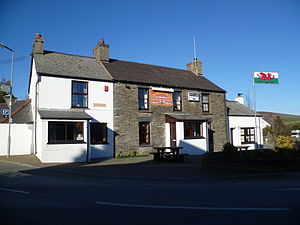 Other than the Crymych Arms public house (dating from at least 1861 but possibly as early as 1812), which remains open to this day, little existed at the spot before the extension of the Whitland and Taf Vale Railway to Crymych in 1874. The area then grew rapidly as a service and transport centre for the surrounding uplands and acquired a reputation for being 'the Wild West of West Wales', reflected in the tongue-in-cheek appellation of Cowbois Crymych by which residents are sometimes known.

The village was sometimes referred to as Crymmych Arms, after the name of the station, for example in a report of an Eisteddfod in 1876.[1]

The first agricultural show was in 1909.[2] A regional livestock market existed in the village for many years; a new purpose-built site was developed north of the village, also accommodating a number of other traders.

Crymych War Memorial, which covers Eglwyswrw, Blaenffos, Llanfyrnach, Hermon and Glogue, records the names of 50 people who lost their lives in World War I and 17 in World War II.[3]

Crymych Market Hall was opened in 1919; with a present seating capacity of 500 (standing) or 250 (seated), it was built as a result of the formation of the Market Hall Company Ltd in 1911. During World War II it functioned as an evacuee centre, a shooting range for the Home Guard and a social centre for American troops stationed locally while they trained in the Preseli Mountains. In 1944 two Cardigan School boys were killed near Crymych by unexploded ordnance.[4]

Crymych's status as 'capital' of the Preseli was confirmed in 1958, when Ysgol y Preseli, a secondary school covering a wide district was opened. In 1996, the school became Pembrokeshire's first Welsh-medium comprehensive school and the number of pupils on its roll has doubled since its launch. Crymych retains a strong identity based on the Welsh language and culture.

Crymych is home to Crymych RFC, a rugby union team formed in 1984 and a cricket club which fields two sides in the third and sixth divisions of the Pembrokeshire Cricket League. "Ras Frenni"[5] road race (over 4 and 8 miles) will be held for the 23rd time in July 2014.[6]

Crymych and District Choir[7] performs locally, nationally and internationally. Bois y Frenni is another local choir whose history dates from World War II. There is a thriving and successful youth activity group in Aelwyd Crymych whose activities range across the whole spectrum of the arts.[8] 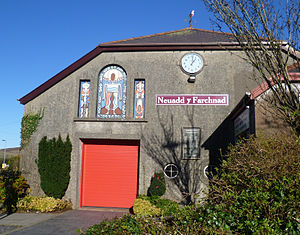 A major redevelopment of the former market site was completed in 2014 and includes accommodation for the elderly, and a new medical centre and day centre to serve the wider community.[11][12][13]

The nearest railway station is at Clunderwen, ten miles to the south. There are bus services to destinations in Pembrokeshire, Cardiganshire and Carmarthenshire.

To the south-east of Crymych, near the hamlet of Glandwr, is the Lammas Ecovillage, a low-impact housing development. Other nearby settlements are Eglwyswen, Hermon, Pentre Galar and Hebron.