Mynachlog-ddu is a village and parish in the Preseli Hills, Pembrokeshire.

The placename means "black monastic grange":[1] before the Dissolution of the Monasteries, the parish belonged to St Dogmael's Abbey.

Mynachlog-ddu and the surrounding Preselis are rich in prehistoric remains. It is one of the possible sites of the Battle of Mynydd Carn in 1081. By c.1100 it was under the control of the Normans. Much has been unenclosed moorland since mediæval times, with few houses. The village developed as housing for slate quarry workers and there has been a chapel in the village since 1794.[3] 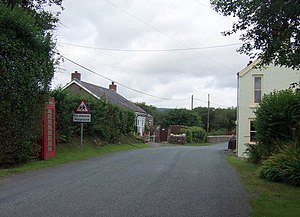 Carn Menyn is presumed to be the source of the bluestones used in the inner circle of Stonehenge. In 2000/2001 a project was established to try to transport a piece of bluestone from the village to Stonehenge. The project ended when the stone sank in the sea. It was lifted out a few months after, but the project was never resumed. A comedy based on the idea of a campaign to have the bluestones returned Bringing Back the Bluestones premièred in Pembrokeshire.

There are two places of worship in the village: the Anglican church (Church in Wales) of St. Dogfael (sometimes, Dogmael), and Bethel, the Baptist meeting house.

The poet Waldo Williams was a pupil at the primary school between 1911 and 1915 where he learned to speak Welsh.

This Pembrokeshire article is a stub: help to improve Wikishire by building it up.
Retrieved from "https://wikishire.co.uk/w/index.php?title=Mynachlog-ddu&oldid=40397"
Categories:
Hidden category: