Llanddewi Velfrey or Llandewi Velfrey is a village and parish in the Hundred of Narbeth, Pembrokeshire. It is located in the Lampeter Valley, two miles north-east of Narberth along the A40 trunk road.[1][2] In 1831 it had a population of 710 people.[1]

The village is situated in a rich and fertile vale, watered by the river Tâf, which separates the parish from that of Llangain in the county of Carmarthen. The lands are wholly enclosed and in a good state of cultivation, and the soil is eminently fertile.[1]

The church, dedicated to St David, is remarkable for the simplicity of its architecture, and displays evident features of a very remote antiquity: an elegant mural tablet of white marble, to the memory of the late David Lewis, Esq., of Hênllan and his youngest daughter, which were put up in the chancel by his widow c.1830.[1]There is a rectory and a vicarage, in the archdeaconry of Carmarthen, and diocese of St. David's. A schoolhouse was built at the expense of the parish in 1828.[1]

The church was rebuilt in 1757, but retains its "archaic 16th century two-bay arcade" with Tudor arches.[3] It was restored in 1861 and the tall western bellcote was added in 1891 by G. E. Halliday.[3] The vicarage house was nearly rebuilt on an enlarged scale under the provisions of the Gilbert's Act.

Bethel Congregational Chapel lies about a mile to the north-east. It is dated to 1849, with a porch dated to 1912.[3] 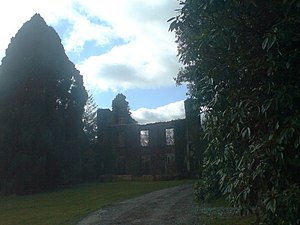 Trewern Mansion is a grade II listed building located about 1.5 miles to the northeast of the village. It was built around 1824 and is three storeys high having a five bay frontage with a three-bay Doric porch and a nine bay rear elevation opposite a large pond.[3] It was the residence of John Thomas Beynon in the 1830s.[1] In 1906 it descended via the Protheroe and Schaw families to Godfrey Evan Schaw Protheroe-Beynon, who was appointed High Sheriff of Carmarthenshire for 1907.[4] It was still in the possession of the Protheroe-Beynon family in 1959.

Plas Crwn, now in ruins, was also a notable house in the parish, a third of a mile to the northeast. It dates to the late 19th century with "castellated fake corner towers and little wings". The cow shed is "heightened in red brick, with little Diocletian windows."[3]

This public house is located along the A40 road. The Hidden Places Of Wales says of it, "Parc-y-Lan lnn is a charming place that dates from the 16th century and, inside, many of this ancient building's original features can still be seen including the fabulous beamed ceiling in the dining room."[5]