Wolfscastle also spelt Wolf's Castle, is a village in Pembrokeshire, between Haverfordwest and Fishguard.

Wolfscastle comprises two small villages; Wolfscastle proper, at the top of a hill, and Ford, situated in the river valley below. The remains of a motte-and-bailey castle lie in the upper village, a strategic location determined by its situation at the northern end of Treffgarne gorge. The village lies at the confluence of the Western Cleddau and the Anghof rivers, in the parish of St Dogwell's. 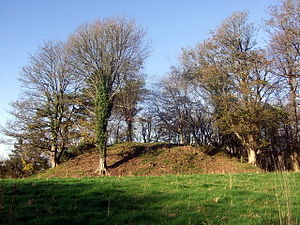 The A40 road, the London to Fishguard trunk route, passes through Wolfscastle and provides the main transport route to and from the village, with a regular bus service connecting with the major towns of the area.

A railway line from Clarbeston Road to Fishguard Harbour carries two Swansea–Fishguard boat trains in each direction daily through Ford. At one time, there was a station named Wolf's Castle Halt near Ford for both passengers and the loading of milk from local farms, but this is no longer in existence, having closed in 1964 after the Beeching cuts.

Musland Farm was once the residence of Captain William Davies Evans, the first utiliser of the Evans Gambit in chess.[1]

The castle formed part of the series of defences constructed by the Normans after 1093 known as the Landsker Line, providing a general boundary between the English-speaking south and the Welsh-speaking north.

A Romano-British villa was excavated by the antiquarian Richard Fenton, hinting that Roman influence extended further west than had previously been thought. It has been subjected to a recent investigation to ascertain its exact location.

The railway was opened through to Letterston Junction from Clarbeston Road in 1906, negating the use of the Maenclochog Railway from Clynderwen to Fishguard via Rosebush.

Wolfscastle's claim to fame is that it is allegedly the place where the last wild wolf in Wales was slain. Nearby, east of Treffgarne gorge lies the hamlet of Little Treffgarne, where Owain Glyndŵr was born according to local folklore in 1353. (Most historical sources quote him as being born c. 1359). This was mainly because the area was home to members of the family of Glyndwr's mother.

Another legend of the area claims that a local medium, Sarah Bevan, prophesied the arrival of the railway after experiencing a vision in the 18th century. The vision was described as a line of carts moving through the centre of Treffgarne gorge at high speed, with the frontmost cart on fire, heralding the coming of the as-yet uninvented steam locomotive on rails.

Mainly agricultural due to its rural location, the village does boast both the Wolfscastle Country Hotel and a public house, the Wolfe Inn. Agriculture involves dairy, sheep and beef farming, and several farms can be found within the village and its environs.

Previous economic assets included slate quarrying near Sealyham, roadstone quarrying in Treffgarne gorge and a village post office, all of which have ceased operating. Also, the running of the halt merited the employment of staff.

A Welsh Independent chapel, known as Pen-y-Bont, stands near the river in Ford. Several churches are to be found in the area – St Margaret's in Wolfscastle itself, St Michael's in Treffgarne, and St Dogfael's at St Dogwells (a grade II* listed building).